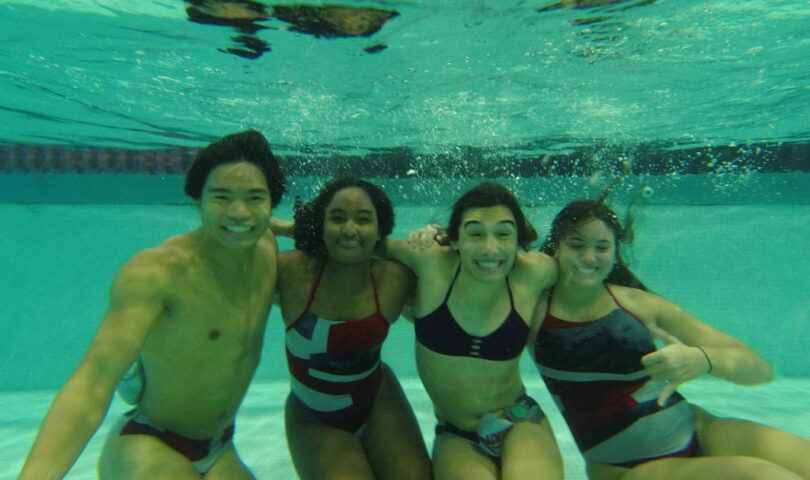 Estimates of the number of transgender collegiate athletes range from about 4,600 to less than 40. This uncertainty stems from systemic transphobia and gaps in how the National Collegiate Athletic Association (NCAA) operates.

“When we’re looking at the men’s and women’s teams, that’s it. Not that there needs to be a trans team, but we’re just not counted,” said Meghan Cortez in an interview with The Ramapo News.

Cortez is a transgender woman who uses she/they pronouns and is a member of the men’s swim team. She believes few college athletes are openly transgender because they fear transphobia will outweigh acceptance, and she feels all the more grateful for the support of her teammates, coaches and the athletic director at Ramapo.

Gary Orr, coach of the men’s swim team, cited training from organizations such as the New Jersey Athletic Conference, NCAA, Ramapo’s own Women’s Center and LGBTQ+ Services, and the Office of Equity, Diversity, Inclusion, and Compliance as helpful resources for creating a space that welcomes transgender and gender nonconforming athletes.

“Inclusive environments require trust and respect. As coaches, though, it’s really important that we model these behaviors with our student athletes,” he said in an email. “We also have to be willing to learn and I learn from my student athletes every day.”

Although coaches like Orr strive for inclusivity, they must follow NCAA restrictions. For example, the NCAA’s “2021-22 and 2022-23 Swimming & Diving Rules Book” prohibits members of men’s teams from wearing a swimsuit that extends above the waist or below the top of the knee cap.

Wearing a swim top would disqualify Cortez from competing in the men’s events, so they apply KT Tape to their chest despite the associated pain from removal and gawking from strangers.

“I choose to tape my breasts because I feel it is very uncomfortable and kind of dehumanizing to swim without a top,” they said. The lack of standards for transitioning athletes forces them to adapt on their own.

Cortez also discussed how she is permitted to use the general women’s locker room but not the women’s team locker room.

“It’s telling me that you can either change in a space you feel uncomfortable with, but with your team, or change in a space you feel comfortable with, but without your team. Some of my teammates on the women’s team change with me because they feel like, ‘Oh, it’s stupid. I’ll just change out here with you. Why would I be in there when you’re out here all alone?’”

The most scrutinized regulation is the one that states trans women cannot join any collegiate women’s swim team unless a blood test indicates their testosterone level in serum is below 10 nmol/L.

This is based on guidelines released by the International Olympic Committee (IOC) in 2015. In 2021, the IOC released revised guidelines that eliminated testosterone thresholds and gave the governing body of each sport freedom to create their own regulations.

“At the time the 10 nanomoles per liter was set because we thought that was the lower level for men. We know now that they go down to seven and women can be higher as well. Agreeing on another number is almost impossible and possibly irrelevant. You can debate that endlessly,” Dr. Richard Budgett, the IOC’s medical and science director, said in an interview with The Guardian.

“I think the threat to women’s sport has probably been overstated,” he continued, and stressed that governing bodies should allow as many women as possible to compete and acknowledge “trans women are women.”

USA Swimming, the national governing body for competitive swimming, lowered the accepted testosterone level to 5 nmol/L. The NCAA chose to stick with 2015 IOC regulations instead of adopting strengthened restrictions to prioritize inclusion in alignment with Budgett’s advice.

This decision caused massive backlash, much of which targeted a transgender swimmer on Penn State’s women’s swim team, Lia Thomas. Her impressive record has been held against her by those who oppose transgender athletes being allowed to compete on teams that match their gender identities.

“[Thomas] is an inspiration to me in that way, but also I felt so bad for her because I know exactly what she was going through,” Cortez said. “Even going into this season, I had a fear of succeeding, because I don’t want what happened to her to happen to me.”

Despite the opposition, Cortez refuses to hide their authentic self. They post on social media about life as a transgender athlete in the middle of their transition.

“I think I’m in a very unique position… being one of the first [openly transgender athletes] here at Ramapo,” she said. “I’m making [these posts] in hopes that people can see what I’m going through and to show I can do this. Trans people can do this, but at the same time there are some difficulties.”