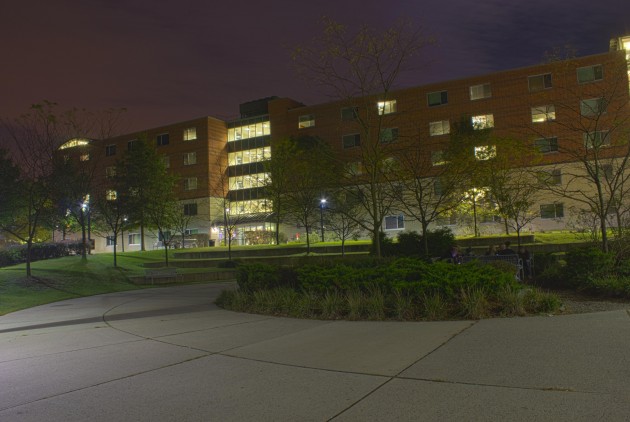 College officials say the residence halls are emptier this year than they have been in the past.

Pine and Linden Halls currently have empty rooms and Bischoff Hall has dropped down to two beds in each room on the top three floors full of transfer students, as opposed to three per room the last few years.

“There is even one girl on my floor that I know of who was not assigned a roommate. She lives by herself in the dorm,” Harrsch said.

Anna Farneski, Ramapo College Spokesperson, said that because of the decrease in students living on campus, the school was able to turn triple rooms in the upper three floors of Bischoff into doubles, which is a bonus for Ramapo students.

According to Farneski, there are 2,771 students living in residence halls this year; 659 of these students are freshmen and 195 are transfer students.

“The decrease in freshmen and transfers is small, about 83, which is offset by an increase in commuter students by 52,” Farneski added.

In Pine Hall, which houses only freshmen, there are currently 319 residents. At its capacity, Pine Hall can hold up to 347 residents.

Similarly, there are 123 residents currently living in Linden Hall, occupying slightly over half the building’s capacity of 241 possible residents.

Across the state, many colleges and universities are seeing a decline in residence hall occupancy

“Everyone believes that this is due to the economic challenges our students and their families are facing,” Farneski said.

While some students cannot afford to live on campus, others simply choose not to because they do not like it or for other personal reasons. Megan Byrne, the Student Government Association’s secretary of Commuter Affairs and the chair of the Commuter Caucus, is constantly advocating for commuter students and listening to their concerns and questions.

Overall, Byrne says that commuters’ reasons for not living on campus are similar. The reasons students choose to live off campus include affordability, their proximity to home, and family or work obligations. There are also commuters who once lived on campus, but have chosen to commute because they could no longer afford it or because they did not enjoy the experience.

As for Byrne, it comes down to the price.

“I choose to commute because my house is within a reasonable distance of Ramapo and it is too expensive to live on campus,” Byrne said.

The slight decline results in fewer roommates for students living in residence halls, a benefit many students at other colleges and universities would be keen on having.

The decline in students living on campus this year is not significant enough to worry the college, Farneski said. Ramapo still continues to provide a solid education, one that Farneski feels is associated with elite, private colleges, at a reasonable price.