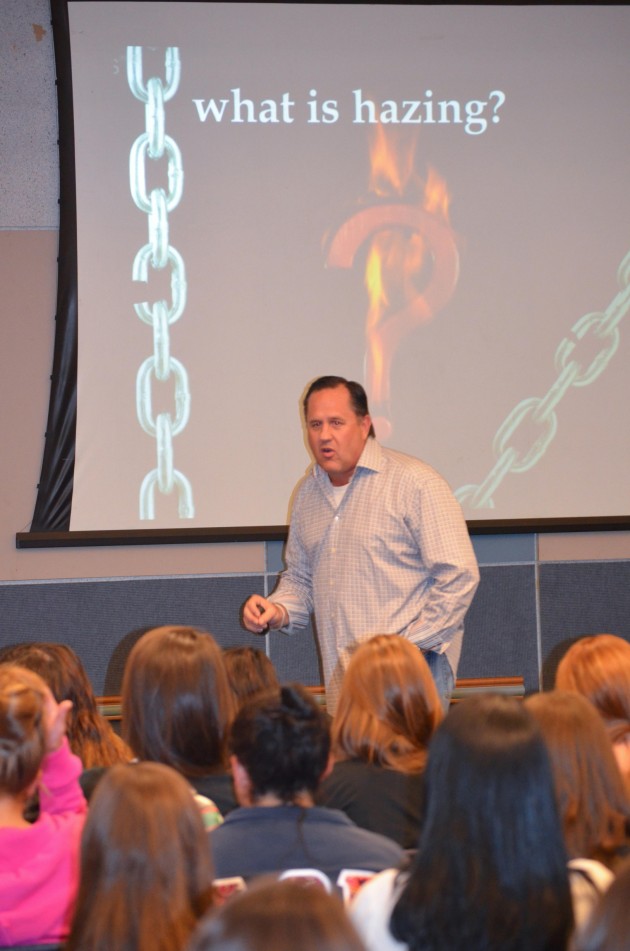 Ramapo fraternities and sororities gathered this week to hear an anti-hazing activist speak about the severity and consequences of hazing. Rick Barnes, an anti-hazing activist who has traveled around the country to speak to more than 1,200 schools, delivered the National Hazing Prevention Week keynote speech to Ramapo Tuesday night.

“Fraternities and sororities are the best existence on college campuses,” Barnes said.

However, Barnes told the students that for the past 42 years, at least one pledge has died from fraternity and sorority hazing per year nationwide. Certain chapters in schools across the country have been suspended and even shut down completely because of problems with hazing.

Barnes defined the hazing law in New Jersey for the crowd and outlined the punishments that culprits would face.

“Barnes was very influential,” said Liam Jones, member of Alpha Chi Rho. “I will definitely alter my future decisions when it comes to hazing.”

Barnes kept the tone light, with an informal approach and relatable jokes. He tied in captivating stories, which engaged the audience for the duration of his hour and a half speech.

He asked audience members a series of questions to determine how they spend their time in college. The consensus was that there are not enough hours in a day to accomplish everything that college has to offer. Barnes reasoned that because students don’t have enough time to do everything they want to do, they shouldn’t waste their time doing something that doesn’t make them better people, like hazing.

Barnes asked the audience to do a variety of important things with their new members that would take the place of hazing. He advised fraternities and sororities to create unity with all members, not just unity by pledge class. He also emphasized the importance of academic learning, advising against his own weak academic performance his freshman year.

Barnes encouraged current Greek members to help develop the social skills of new members, teach the history and purpose of their own chapter, teach the history of other chapters and aid their fellow members in achieving their career goals.

“I was pleased that Barnes took the approach of telling students what you can do instead of what you can’t do,” said Rebecca Unangst, member of Alpha Omicron Pi.

Barnes concluded his speech by asking students to answer a question he cannot answer alone-When will hazing end?

“Step up and be the leaders that you claim to be,” Barnes said. “Put an end to [hazing] before it puts an end to us.”