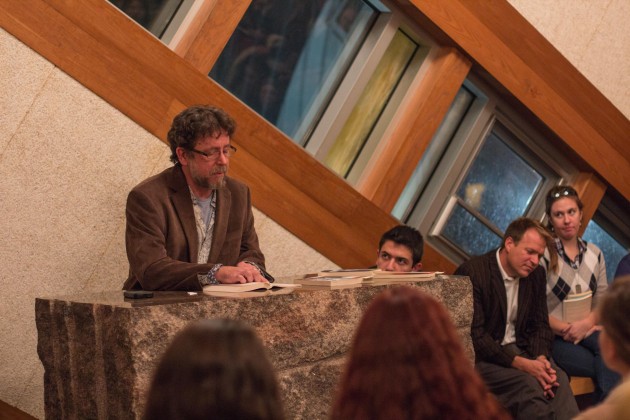 The Readings at Ramapo Visiting Writers Series launched Monday at 7:30 p.m. with poet Beth Ann Fennelly and writer Tom Franklin reading selections from their work and offering advice to the students of Ramapo College about becoming a writer. The married couple read to a packed house at the Spiritual Center.

Fennelly is the author of numerous poetry collections such as “Open House” and “Unmentionables.” Franklin is a novelist and recently released his new book “Crooked Letter, Crooked Letter.” Along with being award-winning writers, both Fenelly and Franklin are professors at the University of Mississippi.

Fennelly and Franklin were asked to speak at this event, put together by the Literature program, to help students connect to professional writers. Professor James Hoch, creative writing professor, brought these writers here because he feels that having experienced authors visit the campus gives students a connection to the art of creative writing.

“Young people should be exposed to real writers who have mastered the art of poetry and fiction. These are writers who live and work everyday, and bringing these writers to campus helps students connect to what we study,” Hoch said.

Junior Rebecca Dolan agrees that having authors come to Ramapo helps her understand what it means to be a writer.

“It’s helpful to hear how they went through the steps of becoming a writer and getting published because I hope to do the same one day,” Dolan said. “They’re out there in the field and it’s great to know how they got there.”

Fennelly started out the program reading a number of poems from her collection “Unmentionables.” Her first poem was a wedding tribute to her college roommate; another was a love poem written to her husband. One poem was made to look like post-its written by her mother and was a revenge poem after her mother looked through her poems and commented on them without her knowledge. Her final two, “Elegy for the Footie Pajamas” and “Because People Ask What My Daughter Will Think of My Poems When She’s 16,” were tributes to her daughter.

Franklin followed Fennelly with a reading from his book “Crooked Letter, Crooked Letter.” He finished off the night by reading a short story he wrote called “Alaska,” which told the tale of two mischievous men who lured women with numerous antics only to return to the crabbing boat they worked in.

Before the reading, Fennelly made an appearance in Hoch’s class earlier that day. Student Lindsay Lewandowski found Fennelly’s class discussion enriched her reading in the Spiritual Center.

“She was in class earlier and it was cool to talk with her and ask her about the process of writing a collection. Then to hear the writings that we had talked about earlier made the reading all the better,” Lewandowski said.

Lewandowski also commented on how the reading enlightened her on Franklin’s work.

“I hadn’t read any of his books before and I thought the excerpt of his novel was great. It made me want to go out and read more,” Lewandowski said.

Another member of the class, Mike Scherb, also appreciated Franklin’s writing style. “The realism he brought to his book made it really interesting,” Scherb said.

The writers stayed after the reading to sign books and offer advice to the students. At the close of her segment, Fennelly talked about how there was no specific moment in her youth where she knew she wanted to be a writer. However, she summed up her desire to become a writer with one realization: “Stories do have power.”