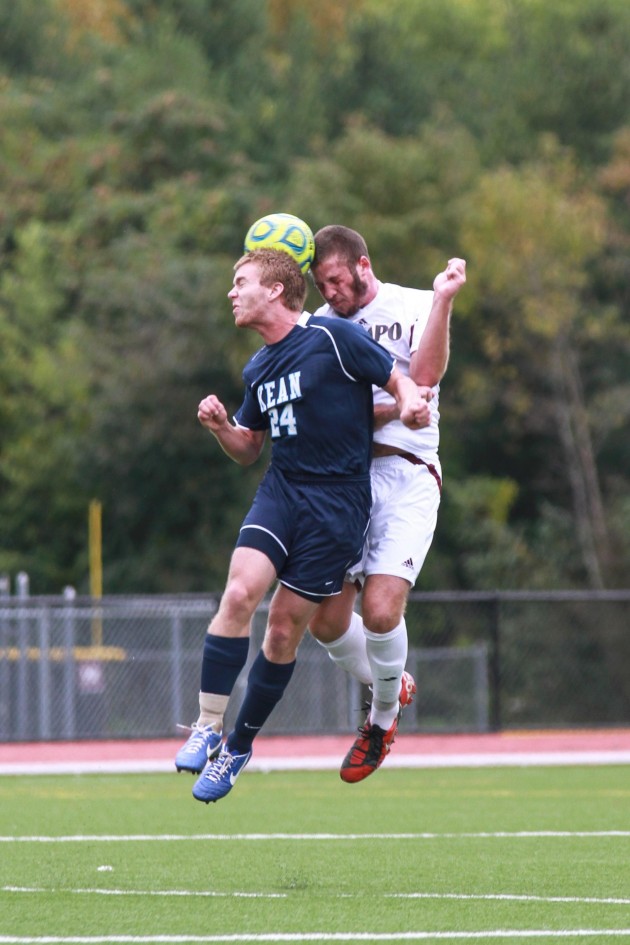 Playing a division rival on home turf is one of the most intense battles a team will face. The desire to protect their house creates the fuel that lights the fire under a team to win at any cost. Ramapo’s men’s soccer team was definitely looking for a victory when they played New Jersey Athletic Conference rival Kean University at home on Saturday.

The rivalry between the two teams is big, with Kean being one of the teams that’s always “messing things up for us,” according to sophomore Zack Savacool.

“We don’t really get along with them,” Savacool said. “We were all very pumped for the game.”

Unfortunately, this passion to win did not help the soccer team as Kean defeated them, 3-0. After this loss, the men’s team fell to a 2-3 record in the NJAC and a 5-6 record overall.

Ramapo faced a disadvantage early in the game when rookie Rob Shalikar, went down on the field with an injury. Shalikar leapt into the air and flicked the ball backwards to a teammate to gain possession. An opposing player jumped up to challenge him and “missed the ball and smacked the side of his head into the front of my head,” Shalikar recalled.

The training staff rushed to the field and an ambulance was called. Shalikar left the field on a stretcher but was able to wave to the crowd as they applauded.

Once the game restarted, Kean capitalized on the opportunity to break past the defense and scored their first goal at 34:00. Rookie goalie Brian Petrunik held them to one goal for the rest of the half, totaling six saves. Ramapo came back on the attack with senior Rob Santinello leading the team with four shots on goal, but he failed to get one in the net. During the second half, Kean scored another goal at 54:06, and then with only three minutes remaining in play, scored their third and final goal at 87:00.

Though the score says otherwise, Ramapo refused to be dominated and kept an aggressive attitude throughout the entire game. By the end of 90 minutes, Kean had only outshot Ramapo by one, leading them 13-12. Even with this show of fight, the team feels they haven’t consistently played their best, which is necessary if they want to become eligible for postseason play. Savacool approached the loss with a very logical outlook.

“We can dwell on losses when they happen, but we just need to make sure we go out and win the rest of our conference games,” he said.

Losing such a meaningful game would leave a typical team feeling low, but the Roadrunners are anything but the average group of players. Their drive to better themselves as individuals and as a team is indomitable. Their goal is to reach the point where they “play like we all know we can,” Savacool said. The need to perform is especially important this season because “this year the NJAC conference is wide open,” according to Savacool.