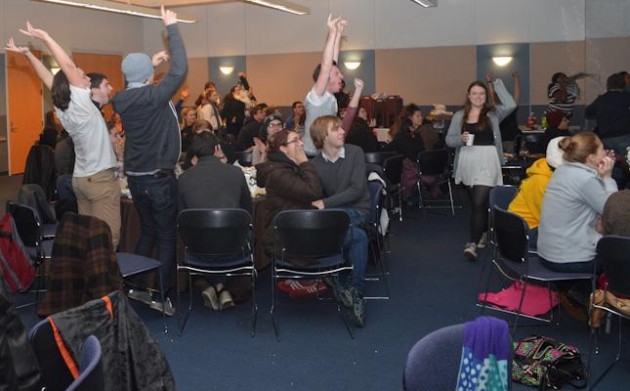 President Barack Obama, in a presidential race that focused on the economy, unemployment and foreign affairs, won a second term Tuesday over rival Mitt Romney, the former governor of Massachusetts.

It was a difficult night for both candidates as they waited out the results of the electoral votes, particularly in Florida and Ohio. As the evening progressed and polls reported official results, it became clear that critical states voted to re-elect the incumbent as their president.

The Ramapo College community gathered to watch the presidential race at a viewing party in the Trustees Pavilion. Sponsored by the Civic and Community Engagement Center, the gathering attracted more than 120 students who enjoyed food and the company of their peers while the results were streamed live from three broadcast screens.

The race was predictably tight. As polls closed state by state, the tally of electoral votes kept the crowd fixated on the progress of the results. By 8:30 p.m., Obama won in New Jersey, New York and Connecticut, but the battleground states of Ohio and Florida were still too close to call at that time.

“Romney has to win Florida in order to have any chance of winning this election,” Jeremy Teigen, political science professor, explained before the results were in.

Some students of Teigen’s class got a firsthand lesson on the electoral process during this election.

“We usually have class at this time, but what better lesson than to watch the race in action and how it ends up?” Chrissy O’Neill said.

By 11:18 p.m., CNN was one of the first media outlets to predict Obama would be re-elected, earning the 270 electoral votes needed to win. This projection came after Ohio and Virginia were reported to go to Obama, which CNN said sealed the deal.

While there are some discrepancies among major news sources, ABC News reports Obama with 303 electoral votes and Romney with 206 as of press time.

As reported in “The New York Times,” Florida eventually went to Obama, but only by less than a point (0.6 percent to be exact). Ohio, coming in at 50.1 percent for Obama with 48.2 percent to Romney, was also a deciding factor for the “Times.”

Impacts on the Election

In the final days of the race, both the Obama and Romney campaigns dedicated a large portion of their budgets toward advertisements in swing states, which increased as the election drew nearer. According to “The Washington Post,” these states, including Ohio, Florida and Wisconsin, received an extra 7,000 television ads just prior to the election.

But students agreed that such advertisements probably did not significantly contribute to the end result.

“The ads probably have some impact on those who haven’t made up their mind, but I think there are better ways to get people in swing states to vote for you,” junior Brian Nazzaro said.

“I do not think these tactics are good, although they are logical,” fellow junior Brandon Seidler said. “The advertisements are extremely annoying, and personally, I feel more obligated to vote for the candidate who was less annoying and more considerate during the race.”

Celebrities were also very vocal about their opinions during this election, which unlike repetitive political ads could sway the vote of a younger demographic.

“I don’t think it had that much of an impact, but it definitely persuades young people,” junior Angie Lebron said. “Older ones are more worried about the real issues, but the younger generations might be more influenced by who the celebrity they are following is tweeting who they are voting for.”

For many students, it was their first time voting in a presidential election, and in some cases, they had to travel back home where they were registered.

“I drove to Madison [New Jersey] where my family lives to vote,” junior Mathew Bernstein said. “Plus, I hadn’t been home since the storm, and I wanted to see that everything was okay.”

The storm to which Bernstein referred was Hurricane Sandy, the “superstorm” that made voting difficult for some. Some polling locations suffered power outages or were being used as shelters for victims who were relocated.

There was also confusion with submitting provisional ballots, as voters were turned away for not having the proper identification. In some states, the polls stayed opened later so that voters could come back with their ID, delaying the final count.

Ramapo College provided shuttle service to two polling locations in Mahwah, and some students, such as Emily Gange and Erin Healy, decided to take advantage of the free ride to cast their vote.

“This is my first election,” said Gange. “I felt it was important to vote towards the future.”