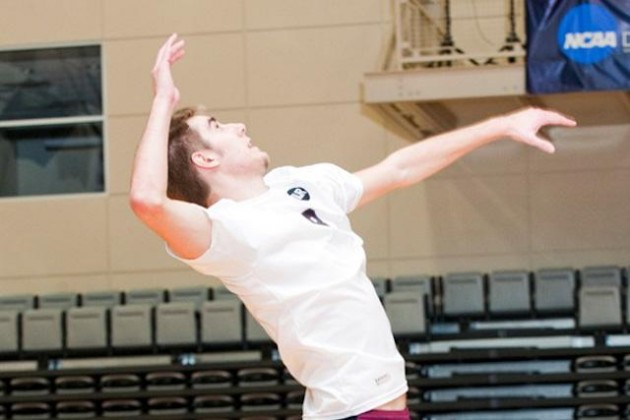 It has been anything but clear skies for the Ramapo Roadrunners as they entered Sunday in search of their first victory of the young season under first-year head coach Kevin Rodgers.

Heading into the first of their two-game conference tournament, the men’s volleyball team found themselves in familiar territory in this season as they fought on to hold a much-needed set lead.

Prior to Sunday’s action, the Roadrunners lost 12 of their first 13 sets, leading to a lackluster 0-4 record to start the 2013 campaign.  The slow start signifies a far distance from where they stood last year, when they commanded a 21-13 overall record with a 13-1 Skyline Conference record.

But Ramapo righted the ship on Sunday with wins over Kean University and Purchase College.

The Roadrunners started the day against the Kean University Cougars, who came in at 2-2 entering their showdown. Ramapo held back Kean en route to capturing a 25-23 win in the opening set of the afternoon. A small victory helped warm the crowd that filled the Bradley Center on a cold Sunday.

The celebration didn’t last long, as Kean stopped the Roadrunners in their tracks, capping off a stellar 25-16 run in the second set for the Cougars. Senior outside hitter Steve Vahalla established the tone of the game for the Cougars with his dynamic cross-court play and helped solidify the second-set win.

Ramapo was undeterred, as they marched back with assistance from junior Mike Kane, who found comfort manning the net under Rodgers’ new philosophy.

“We’ve got a little bit of a different offense and trying out some defenses, so to see it all come together against a big opponent like Kean was nice,” Kane said.

During the third set, team captain Andrew Balint swayed the momentum for Ramapo with a spike and dramatic roar that helped seal a win in the third set.

“Normally I don’t get to hit the ball much, but when I do [and] if it’s a good one, it really pumps me up,” Balint said.

The fourth set saw juniors Nick Hrehovcik and middle blocker Chris Sidnam anchoring the defense and holding the 14th ranked Cougars to a 25-23, 16-25, 25-19, 25-17 victory in the first fixture of the day.

Rodgers spoke about the first match leading into the second game against Purchase College.

“Our defense really help us out against Kean, and that’s what really put us over the edge,” Rodgers said. “We really just want to work on our consistency.”

The victory helped thrust the Roadrunners to a 25-11 routing of the Purchase College Panthers in the opening set of the day’s second fixture. Energized from their previous match, the Roadrunners tested their opponents by spreading the court in the second set-a tangible flaw in the Panthers game that Ramapo exploited to propel them to a (25-11, 25-12, 25-12) victory.

Ramapo extended its winning streak to three on Tuesday, defeating The City College of New York in four sets. The Roadrunners will look to break even at .500 when they play the College of Mount Saint Vincent tonight at 7 p.m.

Rodgers, however, has his sights set higher as he hopes for the Roadrunners to work toward a high seed this postseason.

“Last year we ended up not getting the home-court advantage in the playoff, and that’s one of our goals for this upcoming year,” Rodgers said. “These two conference wins are huge so we can get the home court we need.”