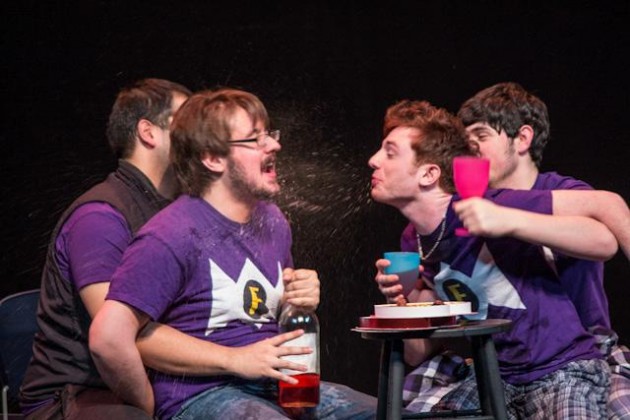 Ramapo’s Sharp Theater was filled with “Loneliness” and hilarity as the Fooligans performed their improvisational comedy show on Tuesday night. With audience volunteers and enthusiasm, this show knocked students off their rockers.

“This show was our Valentine’s Day special. We had decided to title it ‘Loneliness,'” sophomore Fooligans member Ryan McGilloway said. “The reason behind that was just for a laugh pretty much. We didn’t want to call the show ‘The Fooligans Present: Love and Gooey Feelings Blah Blah Blah…’ We wanted something else that people associate with Valentine’s Day so we could parody it. I think not having a ‘valentine’ is something some people do worry about, so it was fun to just play on that notion.”

“I expect this show to be really funny. When you hear my really loud and high pitched laugh, that’s how you know I thoroughly enjoyed it,” said sophomore Rachel Valovcin.

Valentines were handed out as students began filling the theater, which included faces of various performing arts students. This allowed students to get a feel for what they were in for upon entering the show, such as confusion, sensible humor and enlightenment.

“The Fooligans always make me laugh; I have been to every show and have never been disappointed. They are definitely very funny from start to finish,” said senior Melissa Mugica.

The group played all types of games, such as one called “Anonymous Dating Show,” which consisted of three contestants with interesting flaws, including one whose hands were on fire, a man allergic to his own skin and a girl whose behind stuck to anything metal.

“I think our show was beneficial for students because it gives them something to enjoy,” said McGilloway.

Moments such as parents using the word “YOLO” and a man being able to dispense Q-tips from his back were just a small part of this show. It was relevant, kept students involved and most of all, relieved some stress.

The Fooligans brought students on stage, asked questions and portrayed a dramatic and comedic version of the answers from their volunteered audience members. This free event had a large turnout, and with more promotion and advertising, this act was in high demand.

“In a college setting, events that bring in students are what really keep the heartbeat going on campus,” McGilloway said. “Being able to provide not only entertainment, but joy and laughter to the student body is extremely important to all of the Fooligans, including myself.”

“The Fooligans Valentine’s performance was so enjoyable and had me laughing from start to finish. This was my first improv show ever, let alone the first time I saw the Fooligans and I was more than impressed,” senior Lauren Magenta said. “I was shocked that they were college students just like me; they had so much talent. The members were so professional and organized. The show went off without a hitch.”

For further information on where the Fooligans will be causing improvised mayhem next, check out their Facebook page or Tweet at them @ramapofooligans.