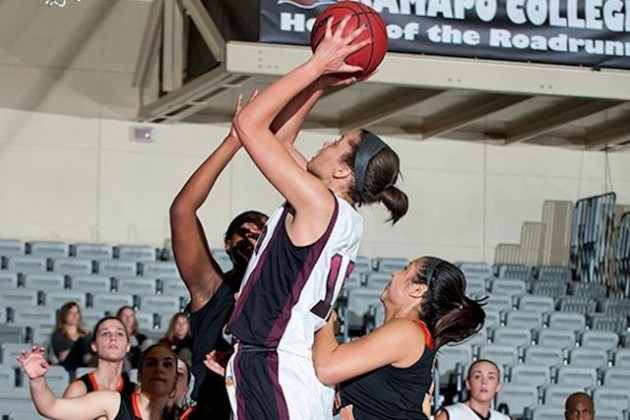 The fifth-seeded Roadrunners ended their New Jersey Athletic Conference (NJAC) tournament run on Wednesday night after losing to No. 4 seed Rutgers-Newark, 60-42. This was the third time the Scarlet Knights defeated Ramapo this season, with two previous losses of 57-52 and 63-43.

The women started the game already at a disadvantage with one of their best players, Jackie Jerkovich, out for the remainder of the season due to a knee injury. During one of the women’s last games, Jerkovich went down during play and was taken out of the contest by the trainers. The injury was categorized as a torn ACL as well as a possible meniscus tear.

“When I fell my knee didn’t feel right,” Jerkovich said. “I figured it was something bad, but I didn’t think it’d be this serious. It’s so frustrating.”

Knowing that their teammate would not play again anytime soon, the remainder of the team tried to step up and fill in as best they could. Especially with the injury happening so late in the season, and such important games coming up in the near future, the whole team felt more anxious than ever.

“Rutgers-Newark is always tough, and we knew it’d be harder without Jackie,” sophomore Kelly Haspel said. “We have other strong players, but it’s still not the same.”

Even without one of their highest scorers, the Roadrunners still powered through and fought the best they could in this do-or-die, one-and-done rematch. They started off strong, with senior Faith Flannery putting up the first points on the board mere seconds into the first half. The squad’s captain continued to keep up with the Scarlet Knights point for point and ended the half leading her team’s scoring with seven points.

Sophomores Kerrie Kosakowski and Alex Milne kept the game close by hitting their foul shots and tying up the score multiple times, and junior Alayna Donadio did her part by sinking two 3-pointers. Junior Micaela Moore grabbed eight rebounds and blocked three shots to end the half. The team was certainly not ready to give up their chance at a championship just yet.

“I knew we needed to win,” Flannery said when asked about her mindset for the game. “I tried to keep that thought in the back of my mind.”

Rutgers-Newark, however, started the second half with a spark, gaining a 10-point lead and never looking back. The Roadrunners tried to play catch up, with sophomore Tierney Henderson shrinking the lead down to eight, but the Scarlet Knights had found their groove.

“They just started scoring. We had them shaken up in the first half, but they just found their rhythm,” said Haspel.

The game ended with Flannery totaling nine points and Milne tallying seven points. Moore posted a team high of 12 rebounds and Donadio was close behind with 10. The Roadrunners record dropped to 17-8 as they wait to find out the date of their first game in the ECAC Metro Basketball Tournament next week.