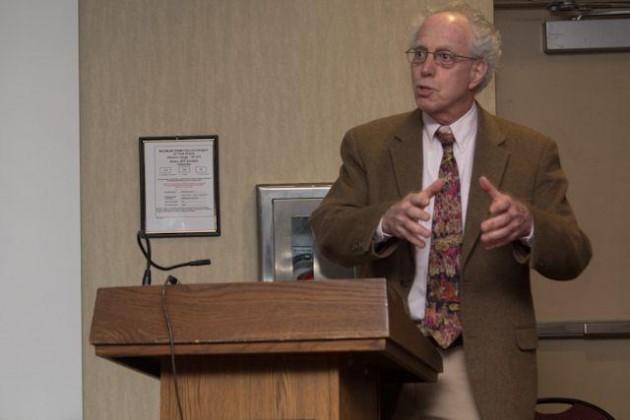 Former U.N. staff member Harris Gleckman presented “Putting Climate and Sustainability on the Global Agenda,” a discussion about dealing with issues regarding sustainability on a global level, to Ramapo students and faculty on Thursday, March 7.

The presentation was one of seven in the “Creating a Sustainable World: Voices of Key Practitioners” series sponsored by Ramapo’s Masters of Arts in Sustainability Studies program (MASS), a two-year master’s degree program.

Gleckman is now an adjunct professor of environmental studies at Ramapo and an adjunct professor at the University of Maine Law School, but he was once a staff member of the U.N. Centre on Transnational Corporations, the U.N. Conference on Trade and Development, and Financing for Development Office of the U.N. Department of Economic and Social Affairs. These positions involved Gleckman in the report drafted by the Brundtland Commission and other important discussions about climate and sustainability, providing listeners with inside information on the U.N.

“Gleckman has been involved in really the most important developments,” said Dr. Michael Edelstein, a professor of environmental psychology and programs in environmental and sustainability studies at Ramapo. “He wasn’t there as a fly on the wall. He was there as a player; he was actually making things happen.”

Gleckman discussed the difficulties of accomplishing tasks, agreeing on issues regarding sustainability worldwide and how the U.N. talks about important decisions on a global level.

“My interest is not just in what people have done, it is how they’ve done it,” said Edelstein.

Gleckman suggested that such a global decision can be made by changing the conversation so that economic development, social development and environmental protection are all considered at the same time.

“There were two major arguments going on that we were trying to answer,” explained Gleckman. “Do we protect the environment or do we create jobs?”

Gleckman explained that it is not the nations that are the biggest factors in making changes regarding sustainability anymore, but rather the multinational corporations of the world.

“The government working by themselves have probably got us as far as they could by themselves,” said Gleckman.

Gleckman asserted that corporations take the necessary steps towards a more sustainable environment. However, Gleckman stressed that consumers also influence the market.

“We are part of the supply chain, and we can affect change through consumerism,” said Sarah Hambleton, a second-year student in the MASS program.

Edelstein agreed that change starts individually, but then must continue by pressuring multinational corporations and enacting change on a global level.

The next presentation of the series is “Green Purchasing: The New Eco-Industrial Revolution Has Begun!” by Kevin Lyons on Thursday, March 14 in the Alumni Lounges.