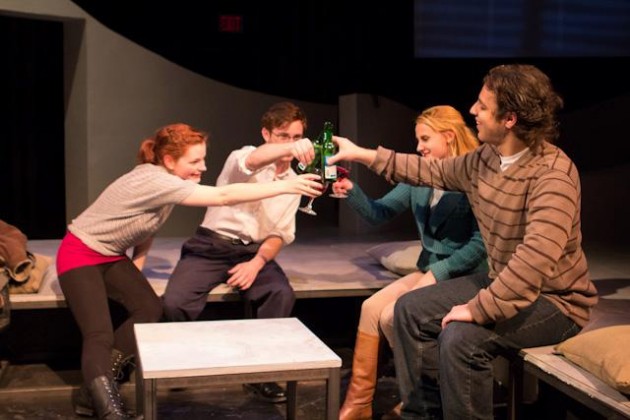 Neil Labute’s “The Shape of Things” is the most recent play to be put on by the students of Ramapo College. The show has been playing in the Adler Theater since March 6, giving intimate audiences the chance to experience this surprisingly dark play.

While the audience enjoys a seemingly effortless performance, Stage Manager Rachel Frascella revealed how much effort and preparation truly went into the show.

“There was a lot of preparation into the show. Our first production meeting was in October. We also had our auditions in December,” Frascella said. “On the stage management end, there is always so much preparation. For Angie, the ASM, and I, we want to have this process run as smoothly as possible, so the more we can anticipate any problems and all of the factors that go into putting this show on, the better the outcome will be.”

“The Shape of Things” follows the relationships of four college students: Adam, a frumpy English Literature major; Evelyn, a bold artist; Phillip, Adam’s crude friend and Jenny, Phillip’s fiancÃ©. After Evelyn and Adam begin a seemingly passionate romance, Adam starts to change himself under the guidance of Evelyn. The audience sees Adam’s transformation and the ups and downs of his relationships played out on stage right up until the surprising climax. In the end, the audience is left to question the ethics of art. Where do we draw the line between creation and cruelty? Also discussed in the play is perception and reality. Is what we perceive reality or is reality concrete?

“The story is a contemporary show, basically about how people change for each other,” Frascella explained. “This show really examines the human will and manipulation, it makes people look into their own lives and relationships.”

These themes were expertly presented through the direction of Pirronne Yousefzadeh. After every scene, a prop was left onstage, leaving visual reminders of Adam’s transformation. The set itself, designed by Maiko Chii, included large wooden pieces that transformed through props and a little imagination into many different settings, including an art museum, a bedroom and a doctor’s office.

Freshman theater major Kara Mendez found that the director’s interpretation was the real triumph of the show.

“The director really grasped the concept of the script. I’ve read it before and I love the set and I love the way she interpreted it…I loved the use of the space and that they left little pieces of his transformation all over the stage. She really understood what she was doing,” Mendez said.

Senior Mel Lewis thought that the show’s modern and familiar feel was also a standout.

“I think this is more relatable and more modern. I also like the fact that it’s a smaller cast and more intimate, so you felt every character more,” Lewis said.

Student actors Ryan McGilloway, Lexi Lapp, Amanda Iannuzzi and Craig Wolfe brought “The Shape of Things” to life. The superb cast, along with the crew members and designers, allowed the show to go off without a hitch. Lewis ascribes this professionalism to her love of Ramapo productions.

“I love the student performances,” Lewis said. “It’s so interesting how people like your peers can make something amazing on stage.”

Frascella encourages everyone to come out to a performance.

“People should come out to see any show that Ramapo puts on. This department explores different aspects of theatre,” Frascella said. “We try to be as diverse in our selection of plays as possible. As my lighting board operator, Rachel Valovcin, just said, ‘Theater is a reflection of life and if you close your mind to theater you close your mind to growth.'”