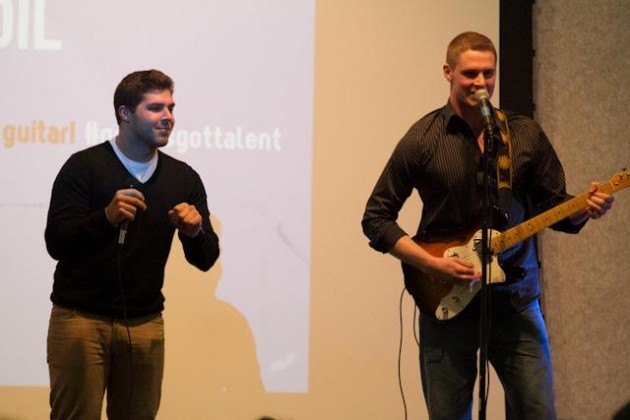 On Tuesday night, Friends Hall was buzzing with Ramapo’s Greek Life for the Greeks Got Talent event that gave sorority and fraternity members the opportunity to get up on stage and perform for a good cause.

This was the first ever Greeks Got Talent. Graduate Assistant for Fraternity and Sorority Life, Naima Ricks described the event as a way to promote Greek unity.

“Greeks Got Talent is a talent show that is hosting various members of the Fraternity and Sorority Life community to showcase their talents to an audience in a competitive format,” Ricks said. “The event’s goals include promoting unity amongst all Fraternity and Sorority Life councils as well as to educate the student body about the diversity among the councils and students as whole.”

While the event acted as a unifier, Greeks Got Talent also helped out a charitable cause. The event was a part of Women’s Herstory Month and worked with Enactus to raise money for the Guatemala Weaving Women project.

Enactus member Alexander Vasilev described the goal of the evening as “to help women from an impoverished community in Cajola, Guatemala sell traditional handmade products in the United States.”

Ricks elaborated, “We worked with the club Enactus and their Guatemala Weaving Women project. We charged $3 at the door, and Enactus sold traditional handmade bracelets and headbands that are inspired by Mayan culture. Enactus efforts are to empower the women and help them create a sustainable business, where they can take care of themselves and their families.”

The event ended up raising over $600 for the cause. Some of the Greeks Got Talent acts included singing, freestyle rap, partner dancing, a lip-synced number from the Alpha Kappa Alpha girls and an emotional performance of “Part of Your World” from the ladies of Sigma Sigma Sigma that was dedicated to their sister Shannon Finn, who passed away on March 20. Their touching performance won them third place overall in the competition. In second place was Dana Menditto from Alpha Omicron Pi, who sang and played guitar for her act.

The overall winner of the night was senior Ashley Wood of Alpha Phi Omega. Wood sang and played her guitar performing “Your Love is My Drug” and “Buy You a Drink.” Wood is no stranger to talent shows and has been doing them since she was a freshman. Despite Wood’s experience in performing to a crowd, she was still nervous to take the stage at Greeks Got Talent.

“I’m a little nervous,” Wood said before her act, “Tonight there’s a lot of karaoke, a lot of dancing, a lot of social Greek Life so I’m a little bit out of my element, but I’m excited.”

Out of her element or not, Wood won the top spot and took home the first place trophy for her unique performance. While Greeks Got Talent was a great chance to showcase her talent, Wood also appreciated the chance to get involved in the Greek community.

“I’m in a community service fraternity so we don’t really the chance to get really involved with Greek Life a lot, so I really look forward to chances like this to kind of put ourselves out there so people will know our names, know our faces and where we can get more involved,” said Wood.

This event was not just for the Greeks, however. Other students came to enjoy the night and take in the talent. Freshman Dan Schenker came to Greeks Got Talent to support his friends.

“I had a great time tonight,” Schenker said. “I enjoyed supporting my pals Rich and Denzil. I also thought the dedication song for Tri Sigma’s lost sister was very deep and moving.”

Greeks Got Talent gave the Greek community a place to interact, showcase their talent and support a great cause.

As Ricks explained, “The purpose of the event is to create an entertaining and inclusive environment where students feel safe and encouraged to network with other students.”