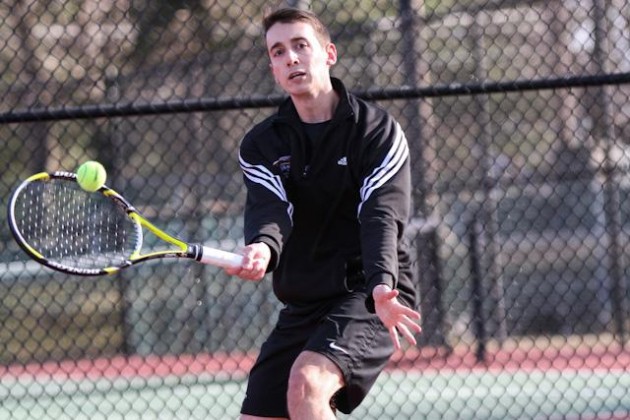 Ramapo dropped all three rounds of doubles before winning three of six rounds of singles to finish the match down 6-3.

Ramapo’s first doubles pair of Justin Gerstl and Jacob Khodakov was defeated 8-3, and the second pair of Evan Clayton and Matt Giuliari lost 8-2. The third doubles pair of Miles Murphy and Jacob Wyble lost 7-4 in the tiebreaker to drop their match 9-8.

The Roadrunners would have had to win five of the six rounds of doubles to win the match.

Gerstl won in the first single round by two scores of 6-3. Clayton defeated his opponent as the second single. After dropping the first set 6-1, Clayton won the second 6-4 and the super tiebreaker 10-8.

The Roadrunners inched closer to a chance at victory in the third singles match, as Khodakov defeated his opponent 6-1 and 6-4. However, the Roadrunners dropped the next three singles spots.

The Roadrunners were coming off a trip to Hilton Head, S.C., over spring break in which they went 2-2 after winning their first two matches 9-0 each.

“We had plenty of practice down there,” Baig said.

Mount Saint Mary also played games in the south over their spring break. They went 2-3 in five games they played in Orlando, Fla. from March 4-7.

The tennis team’s next game will be another home match against Hunter College on Saturday at 1:00 p.m.