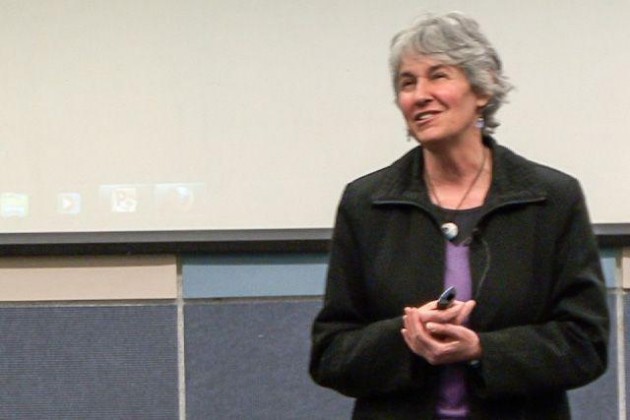 Her presentation, “It Takes an Ecovillage: Modeling the Sustainable and Resilient Cities of Tomorrow,” explained the goals of ecovillages and how to accomplish them.

The presentation was one of seven in the “Creating a Sustainable World: Voices of Key Practitioners” series sponsored by Ramapo’s Masters of Arts in Sustainability Studies program (MASS), a two-year master’s degree program.

Walker is the executive director and a member of the Ecovillage at Ithaca. She has written two books on the topic and is globally recognized as an expert on the subject.

Walker is “a visionary and leader in taking the ecovillage model and figuring out how to apply it more broadly, and at the same time she continues to grow her own project,” said Dr. Michael Edelstein, a professor of environmental psychology and programs in environmental and sustainability studies at Ramapo.

Walker began by addressing the difficulties of living sustainably in a world full of technology that is considered important to daily living. She pointed out, however, that it is possible to live sustainably and that there are people currently doing it.

“There are people not only in this country, but all over the world who are really looking at how to make positive change happen in a comprehensive way that makes sense,” Walker said. “That is practical and very doable right now.”

There are currently 17,000 ecovillages around the world. Some of these are traditional villages that have simply not developed modern practices, but as Walker pointed out, there is a lot to be learned from them.

“Many of the ecovillages are trying to figure out how to combine the best of traditional ways of living that make environmental and social and economic sense from a sustainability perspective, and also combine that with modern ways of life that make equal sense and put them together,” Walker explained.

Ecovillages practice many sustainable habits, such as nestling human habitats into nature in Australia, using local food processing and consumption to support local economy and health in Denmark and re-using before recycling in Uruguay.

Walker’s ecovillage, the Ecovillage at Ithaca, has been around for over 20 years and is currently made up of 160 people.

The ecovillage at Ithaca has tried to solve current problems in their own community with housing and transportation, like the rising square footage of houses that leads to the use of more resources to build, energize and heat them.

There are currently three co-housing neighborhoods, each with 30 to 40 households. Each neighborhood includes a pedestrian street on which no cars travel and a common house which hosts several community meals a week as well as a community laundry space and eight home offices.

The ecovillages are formed on basic principles like green building, the clustering of housing, using alternative energy, creating social support systems and increasing the density of housing.

“None of them are rocket science, none of them are particularly new, but it turns out when you put all of these together… that’s where the magic occurs,” said Walker.

The Ecovillage at Ithaca, with the help of an EPA Smart Growth Grant, is attempting to study what they have done sustainably as a village in the past in an attempt to educate other communities on ways to live sustainably in a similar manner.

“We are trying to not exactly replicate what we have been able to do in this particular ecovillage, but use it as a stepping stone to inform developers, architects, planners, house buyers to see what is possible,” said Walker.