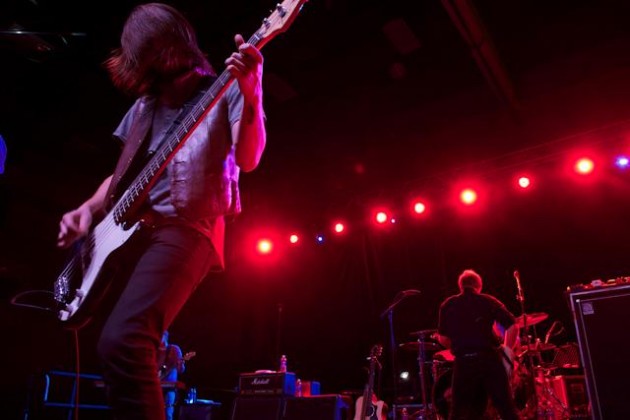 This Saturday, Mayday Parade, The Maine and We the Kings performed for a sold out crowd at the Bradley Center for Ramapo’s annual spring concert.

“The spring concert is the toughest event that we program,” sophomore and publicity chair of the College Programming Board Max Zeigerman said. “[After a survey was sent out] as an e-board and within our committees, we discussed which artists more students at Ramapo would enjoy and through elimination and a lot of consideration, we ended with We the Kings, The Maine, and Mayday Parade.”

Some attendees lined up as early as 7 a.m. and tickets were sold out by the time doors opened at 7 p.m.

“I was very impressed with the concert. It was sold out early – around 3 p.m. the day of the concert – which was amazing and unbelievable,” Zeigerman said. “We had visitors from Virginia camping out from 7 a.m. until the concert so that is true dedication.”

The Maine took the stage first, performing songs such as “Inside of You,” “Secret Valentine,” “Into Your Arms,” “Growing Up” and “Like We Did.”

“We up here as a group, collectively, will be releasing an album this summer,” the band stated during their performance. “[We will be] touring as well.”
The Maine have won awards for Album of the Year, Best Song and Best Live Band. Their most recent album was “Pioneer,” released in 2011, but fans can look for something different with their new album.

“We took a different approach [than with Pioneer]. We recorded everything live this time and we recorded it to tape, so it’s got that feel and for somebody that listens to music and can distinguish the sound of digital to analogue recording I believe will appreciate that,” the band said during an interview with “The Ramapo News.”

We the Kings took the stage next. Their new single, “Just Keep Breathing,” was just released on Friday and sold more than 20,000 copies in 24 hours.

During the concert, they played songs from all of their albums, including “Check Yes Juliet,” “Secret Valentine,” “We’ll be a Dream” and “Heaven Can Wait.”

“When we were kids going to our favorite band’s performance or show or whatever and they didn’t play one of the songs we wanted to hear, we would be bummed out,” lead singer Travis Clark said in an interview. “And it doesn’t matter that we’ve played ‘Check Yes Juliet’ every single show we’ve ever played our entire life, it doesn’t mean that we’re just not going to play it one day, cause you know [fans] would be pissed.”

“I enjoyed the concert and event got a guitar pick from We The Kings,” freshman Kevin Costantino said.

Mayday Parade closed the show with memorable songs including “Black Cat,” “Jersey,” I’d Hate to Be with You When People Find Out What This Song is About” and “When You See My Friends.”

“It was the best spring concert Ramapo has had in a while. All three bands were really awesome and it was overall a really fun time for me and my friends,” junior Jessica Donovan said. “I knew all three bands and couldn’t wait to see them live. It was so great that Ramapo invited Mayday [Parade], We the Kings, and The Maine. I really enjoyed the show.”

This was the second year that Ramapo chose to bring three bands instead of one performer to the spring concert.

“The bands, the committee members, the volunteers and everyone that came out helped make the event successful and we are very proud of our accomplishment,” Zeigerman said. “I could see this type of format being used again for future concerts. The festival exposed students to various bands so if they didn’t enjoy one, they could still come out to listen to another.

This concert was definitely successful and in future years we will be looking back and trying to use it as an example to follow.”

For more information or to get involved with choosing the next spring concert performers, contact CPB at cpb@ramapo.edu.

To see full interviews with the stars, visit “The Ramapo News” online.