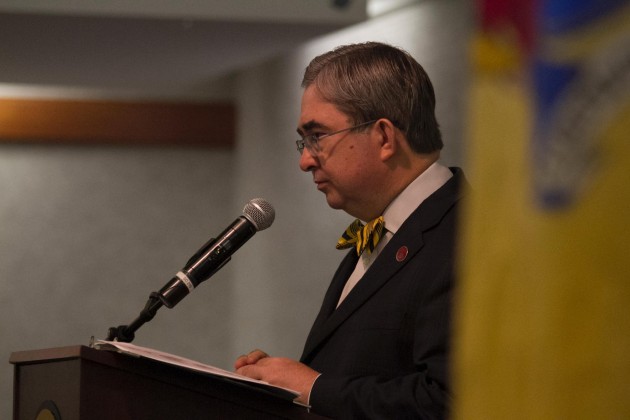 “A Tale of Two Cities” was the theme of President Mercer’s State of the College address yesterday, where he formally updated students, faculty and other members of the campus community for the 17th time since assuming office in 2005.

“It was the best of times, it was the worst of times,” Mercer began, characterizing Ramapo’s present condition as a dichotomy of strong growth and fiscal instability.

In many ways, he explained, the College is in the midst of one of its best times. There is an emerging building boom, ignited by diligent on-campus construction, and there is increasing recognition for faculty, staff and programs offered by the school.

In addition, President Mercer mentioned that the incoming freshmen class has been the most qualified group of undergraduates the colleges has ever experienced.

Kevin Ng, alternate student trustee, said he is impressed with the energy of the incoming freshmen class.

“My interactions with the freshmen class have been positive and enthusiastic,” Ng explained. “They’re engaged in activities, especially those that I am involved with. I’m excited to spend the next three years with them.”

Vincent Guinta, current president of the Student Government Association, said, “The Class of 2017 is very involved. We want to work with them as much as we can.”

Additionally, President Mercer touched upon the positive direction the Village Housing Agreement has taken, as facilitated and organized by SGA.

“The Village Housing Agreement makes us an advocate for the entire student body,” Guinta said. “There are other issues to touch upon, but certainly, the Village is the beginning of what we can change.”

Anthony Padovano, professor of literature and philosophy and founder of the Salameno Spiritual Center, recently donated $200,000 to the College for a new College Commons to be converted from the historic stone building, Mercer said.

“I built my life around life, faith and friendship,” Padovano explained. “The word faith [to me] means trust. Working on the spiritual center, I was concerned with a place for people to go to figure out that trust.”

Professor Padovano suggested that faculty and staff would use the Commons during the daytime, and students would use it at night to socialize.

“The point is to enforce bonds of friendship among faculty, staff and students,” he said. “The idea of friendship, relationships and love are incredible mysteries that make us think of larger means, so the highlight of the idea is friendship.”

However, Mercer also explained that Ramapo has been experiencing “the worst of times” within the realm of higher education.

President Mercer discussed the budget deficit that must be “solved structurally” with two requirements: “by working together” and “sacrifice from every single one of us.”

He also mentioned a new piece of legislation, introduced by State Senator Sandra Cunningham, to establish a performance-based funding formula to be used towards different public institutions.

A press release posted on the Senate Democrats website states: “The bill, S-2695, would establish the New Jersey Higher Education Funding Formula Commission to explore how other states fund their institutions of higher education and to develop recommendations on the best funding mechanism for New Jersey colleges and universities. “

The date of issuing this potential bond money to the College has not yet been determined.

President Mercer’s address touched on other news as well, including the Facilities Master Plan, which will be presented to the Board of Trustees for a vote on September 30.

The Facilities Master Plan was developed in coordination with the College’s new Strategic Plan, which was approved June 24 by the Ramapo College Board of Trustees. Senior Planning Officer Dorothy Echols-Tobe will be leading a team to evaluate and ultimately achieve the objectives of the College’s new Strategic Plan. In the near future, these organizations will report their progress and findings to better engage in meaningful discussion with constituents within the College.