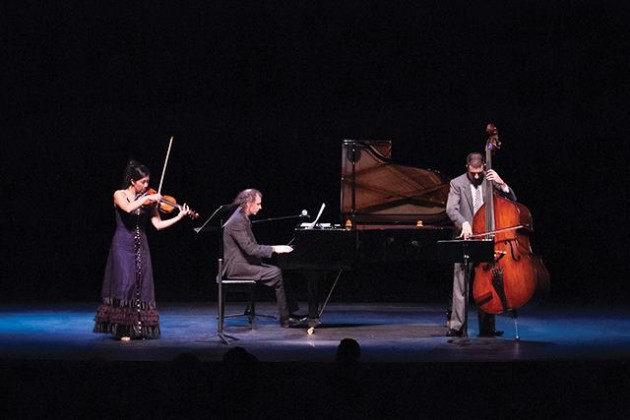 Many audience members did not know what to expect, as urban tango is an unfamiliar term to most. What they would soon find out is that they were in for a fantastic night of music.

Machiko Ozawa, the former concertmaster of Orquesta SinfÃ³nica Sinaloa de Las Artes, played the violin. Pedro Giraudo, acclaimed arranger and composer, played the bass, and Latin Grammy award winner Octavio Brunetti was on the piano. The Urban Tango Trio has played in places such as Washington D.C., Virginia, Japan, and now they have Ramapo to add to their list.

Ozawa, Giraudo and Brunetti played a range of both traditional music and “Tango Nuevo.” The artists produced the rhythms of a time passed with their instruments.

When Ozawa played, her music went through her body, and you could see that she not only played the music, but felt it in her skin. Ozawa’s facial expressions conveyed the emotions in the cords she played, sadness in some and excitement in others. By the way Ozawa reacted to the music, the audience could tell that she knew the composition and its history well. Ozawa was the focal point of the stage, and the audience’s eyes were drawn to her.

On the right side of the stage was Giraudo. When Giraudo played, he brought order and structure to the compositions while Octavio, who was at the center of the stage, held everyone together.

As Brunetti and his trio performed, the audience experienced Argentine music history the best way they could: live and outside of the classroom. There is nothing like experiencing something for yourself. Between each composition, Brunetti told the audience a little bit of the history behind the music’s inspiration and the thoughts of the composers who wrote the pieces.

All of the artist had what seemed like a personal relationship with their instruments. Giraudo frequently looked as though he was waiting for the reply of his instrument; Ozawa curled her body around her violin; Brunetti felt every note in his fingertips.

Chills ran down the audience’s back as they heard the voices of decades gone, and experienced Argentine history through the emotional performance of the trio. The music was trance-like and made the audience feel as though they were in another place. The emotion of the compositions took over the artists. Perhaps some audience members felt as though they were in Argentina during the time in which the songs recollected. Perhaps others felt as though the trio was playing to them individually.

Octavio Brunetti’s Urban Tango Trio was captivatingly passionate, and fittingly the trio received a standing ovation from Ramapo students at the end of the show.