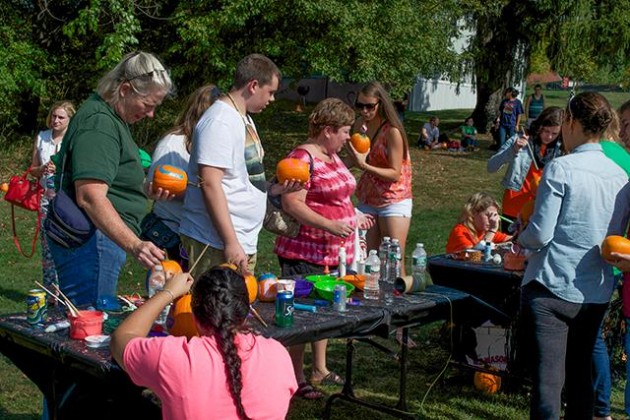 From Thursday to Sunday, Ramapo College held its annual “Octoberfest,” an event that brought Ramapo students out in droves to enjoy some time with their friends and family members.

Starting with Sports Night on Thursday and ending with the New York Giants vs. Philadelphia Eagles NFL game broadcast at J. Lee’s on Sunday, many Ramapo students and their families enjoyed the occasion.

During Family Day, the families of first-year students were invited to the school for mock classes, seminars and other events during the morning hours before the Octoberfest Carnival, which ran from noon to 4 p.m. on Saturday.

In fact, there was a booth in which guests could design their own trucker-style hats adorned with phrases such as “Ramapo College,” “Roadrunners” or “RCNJ.”

Andreina Santamaria, a sophomore who transferred to the College this semester, said that the carnival “is a fun event with free food and gives you opportunities to see friends. My favorite part of Octoberfest was decorating pumpkins.”

Santamaria and her friends decorated pumpkins with paint, glitter and anything else needed to glitz up an ordinary pumpkin into a work of art.

Although many groups of students came to Octoberfest just to enjoy the day’s festivities, other students were there to attract potential members for the College’s many clubs and organizations.

Junior Alex Ciocci was in attendance at Octoberfest primarily “to do some tabling for the Phi Delta Epsilon medical fraternity,” of which he is a member, but he also enjoyed the free food offered by Bourbon BBQ & Catering of Wyckoff.

“I like the fried chicken being served,” Ciocci said.

Unlike many events on campus, Octoberfest attracts a variety of attendees across the Ramapo student body.

Senior Casey Fitzsimmons, who first attended as a freshman in 2010, admitted that she “liked the free stuff” and enjoyed the annual carnival because it is “the biggest event on campus.”

“It is an opportunity to see the whole student body doing things,” Fitzsimmons added. “I was here to see what was here, but more importantly, I came to see who was here. It’s become a tradition for me.”

Octoberfest has indeed become a Ramapo College tradition, attracting not only current students and their families, but a significant number of alumni who feel that Ramapo holds a special place in their hearts.

Emy Phillips, who graduated from Ramapo this past May, also attended the carnival on Saturday.

“I love the free stuff, but more importantly, I love Ramapo,” Phillips said.