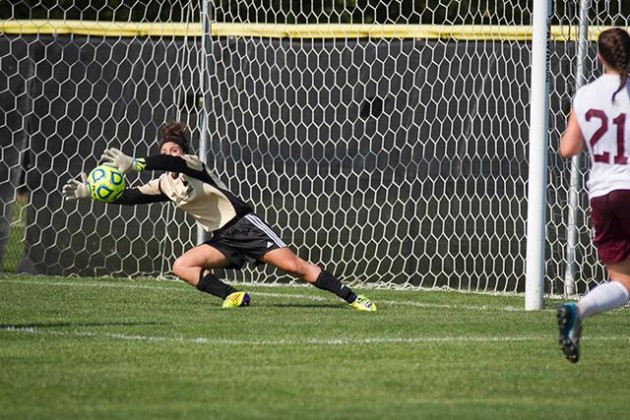 The Ramapo College Roadrunners women’s soccer team was defeated on Saturday 3-2 by Kean University in a New Jersey Athletic Conference matchup at home.

With the loss, the Roadrunners fall to 4-7 overall, while posting a 1-2 record in the NJAC. Kean improved to 4-1 in conference and now sits a full nine points ahead of Ramapo in the NJAC standings.

Kean junior Sam Marchetti opened the scoring at 12:03 when she was left uncovered by the Ramapo defense and blasted a shot past Ramapo goalkeeper, senior Talia Auslin.

Marchetti then tallied her second of the game and her fifth of the season just 92 seconds later on a pass from Kean senior Shannon Pedersen. The Roadrunners found themselves in an early 2-0 hole.

Despite falling behind early, Roadrunners coach Abby Shiffler remained optimistic with plenty of time left on the clock.

“Our mindset was that we had to find a way to get back into the game. We gave up two fairly easy goals back-to-back, but knowing we were only 20 minutes into the game, we had plenty of time to get those back,” she said.

Ramapo was not able to cut into Kean’s lead until the second half at 60:20, when Ramapo sophomore Autumn Herring beat Kean goalkeeper, sophomore K.C. Nunez, off a cross from the right side into the box from senior Katie Popowych.

Just over two minutes later, Marchetti fed a pass to Kean sophomore Angie Lopez, who powered a shot past Auslin to put Kean up 3-1. The goal was Lopez’s eighth of the season.

The Roadrunners again cut a two-goal deficit to one when Popowych scored her fourth goal of the season with less than 10 minutes left in the game.

Desperate for the tying goal, Ramapo freshman Campbell Duffy blasted a kick from outside the box with just under eight minutes left to play. Nunez made a diving save to preserve her team’s lead at 3-2.

Kean was able to hold on, refusing to allow Ramapo a shot in the last seven minutes of play.

Shiffler said that her team was not able to maintain possession of the ball in the final minutes and could not generate a scoring chance.

“We didn’t do a good enough job of maintaining possession. As we become more experienced, we need to think more tactically. If you don’t have the ball you can’t score,” Shiffler added.

Despite outshooting their NJAC rivals in attempts 15-11 and shots on net 8-6, the Roadrunners could not find a tying goal and trailed nearly the entire game after the two quick goals by Marchetti.

Auslin made three saves in the game and played the full 90 minutes, something she has become used to as a Roadrunner.

In nine games this year, she has logged 776 minutes, only playing less than a full game once.

Last year, Auslin played in 16 games while starting 15 and logged 1,170 minutes, posting a 2.00 goals against average and seven shutout performances.

The Roadrunners will look to regroup after losing the first of five straight NJAC matchups. The team will visit William Paterson University Wednesday and Rowan University one week later.

“In my mind, William Paterson is a must win game for us. Not only because we are both so close in the standings, but also because I like our chances. The longer we go without another win in the NJAC, the harder it will be to make the tournament. There are no easy games in conference play,” she said.

Ramapo will then host Richard Stockton College on Oct. 19 and travel to Rutgers-Newark on Oct. 21.

“For the next four games, we will need to continuously improve. If we can learn to keep our composure for the full 90 minutes and put away our chances when we have them, I truly feel we will be a very tough competitor,” Shiffler said.