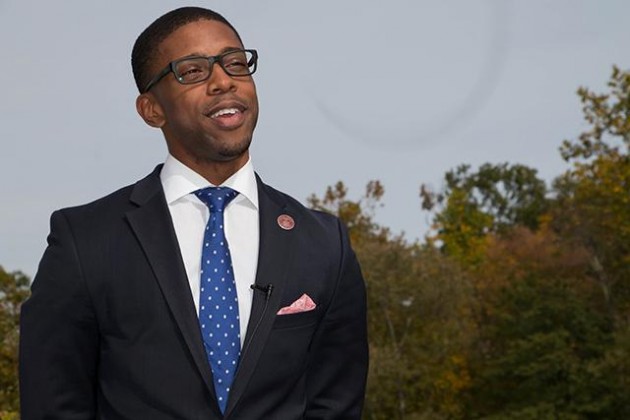 Ramapo alumni Damien Connors addressed the Ramapo community on Wednesday in honor of the 50th Anniversary of the March on Washington. Connors discussed racial equality, politics and most importantly, context.

To put Damien Connors, executive director of the Southern Christian Leadership Conference into context is no easy job-he’s an accomplished, well-rounded former student. But New Jersey Senator Loretta Weinberg did her best.

“We are sending forth one great, tough, Jersey boy who knows a lot about women-what else could you ask for?” Weinberg said with a smile.

Connors, a former political science major at Ramapo, moved on to attend Princeton Theological Seminary receiving a Master of Divinity with a concentration in women’s studies. He then received a Master of Theology while focusing on gender, race, religion and politics from Emory University.

Connors is currently working as the National Executive Director of SCLC as their Chief Operations Officer, but he is not stopping there.

“As far as other pursuits, I’m really hoping to, at some point, run for public office-probably congress,” Connors said.

As he reached the podium, he recognized what a privilege it was to be speaking at his alma mater.

Explaining that he was asked to speak about the 50th Anniversary of the March on Washington, Connors began by asking the audience to imagine what it would feel like to be persecuted in their own homes-the one place where they were supposed to feel safe. He explained that the African American people as a whole always struggled with their fate in a space they were supposed to feel at home. Using examples like the Montgomery Bus Boycott of the 1950s, Connors moved closer to the problems of today.

“Everything has changed, but nothing has,” Connors said. “Many issues we’re still confronting today-issues of equality.”

Connors spoke about recent issues concerning voting equality-something that many audience members could relate to. He expanded upon the idea, discussing the new voter ID laws and the locations of voting stations. He explained that at times decisions are made and locations are picked to single out a certain group to make sure their vote wouldn’t count. He claimed that people are being “road blocked” by these actions-that we’re living in a society where, if we look at it in “context,” social programs are being taken away.

“The conversation around these programs and the way in which funding is happening is not situated in context. One thing I learned in the seminary is that there’s always a context to the text, and once you take the text out of context, you miss all of the necessary components that will allow you to understand, in a comprehensive way, what’s actually happening,” Connors said.

Connors’s speech, covering a wide range of concepts, focused mainly on one common theme: equality. Being that he focused on women’s studies for a certain time in his life, Connors made sure to include a conversation on women as well.

“Connors’s presentation was not only enthralling, but it captivated the minds of a wide range of audiences as well,” freshman Bobby Greco said.

Although many were interested in Connors’s speech, no one, it seemed, was as proud as his former teachers. One such teacher, Karl Johnson, associate professor of African American studies, had the opportunity to speak about Connors during the event.