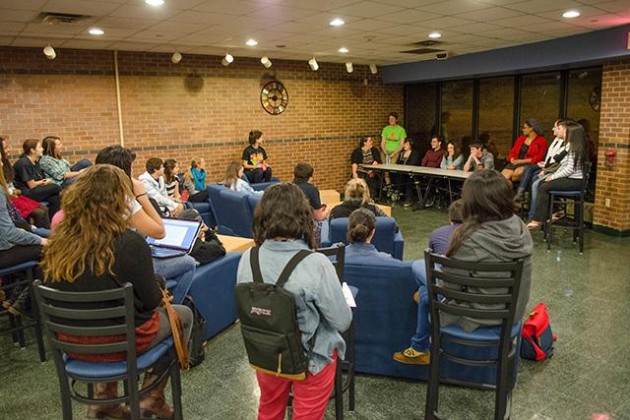 Ramapo Pride hosted its own “Test Your Gaydar” event on Tuesday, in which panelists answered a series of questions to identify stereotypes about the queer community in honor of Queer History Month.

“The event is based on stereotypes about the queer community,” said senior Eden Nguyentan, president of Ramapo Pride. “Stereotypes are basically just mental shortcuts that allow us to think easier, but the danger is that they are not always true. And we tend to fall back on them.”

The audience asked a total of 47 questions to the panel. The questions could be directed at an individual or a certain gender of the entire group. Any panelist could reserve the right to not answer a question.

The event gave students the opportunity to openly talk and ask questions about a topic that is not often a part of day-to-day conversation.

“In the simplest sense, sexual orientation and identity does not always get openly talked about. It’s important to learn about it in a safe environment to prevent problematic errors in action or speech later,” said Cara May, a senior pride member on the panel.

The questions the audience asked ranged from silly to serious, but the panelists were open to answering all of them. Some audience members asked if panelists had any Lady Gaga or Beyonce music on their iPod, if they wore pink or if they owned any rainbow items.

Others were direct and asked specifically if panelists had kissed or cuddled with members of the same or opposite gender. There were also out-of-the-box questions like, “Do you consider yourself kinky in bed?” and “When you hold hands with someone, is your hand on top?”

After everyone had a chance to ask questions, the audience took turns guessing each panelist’s sexual orientation and then each panelist revealed his or her identity. Among the ten panelists, there were five different sexual orientations represented: heterosexual, homosexual, queer, omnisexual and bi-curious.

“I could not have even guessed the other panelists myself,” said Chris Conti, a junior who was on the panel. “You can’t judge a book by its cover.”

“I enjoyed being on the panel. I always enjoy an opportunity to openly educate people,” said May.

Audience members recognized that what they originally thought about the panelists’ sexual orientations were often far from correct.

“Even sometimes when you think you know a person, you might not really know,” said Jessica Amill, a freshman. “I thought the event was really successful and showed that stereotypes don’t apply to everyone. You can really be fooled.”

Nearly 40 people came to support the event, and everyone was able to take away something different from it.

“I think that a lot of people were probably surprised by at least one of the identities that were revealed and I think that in itself accomplished the purpose. Not all stereotypes are rooted in truth,” said Nguyentan.

“There are lots of different types of straight people, so the same can be said for the LGBTQA+ community,” said Catherine McCarthy, a junior attendee.

“Hopefully, people can take away a little bit of fun from the event, along with the knowledge that there are people from many different communities right here on campus,” said May. “It’s not an out there thing, it’s right here.”