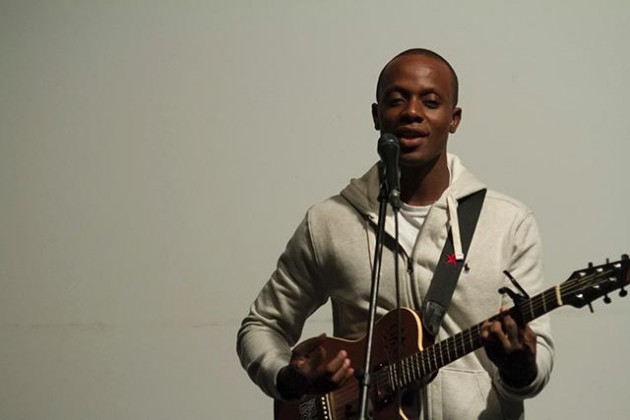 Singer and songwriter Nelly’s Echo gently commanded the stage in front of an intimate audience in Friends Hall last Tuesday. Nelly’s Echo was charming, comical, and most importantly, incredibly talented. His stint on NBC’s singing competition “The Voice” does not define the gentle spirited man behind the guitar who so effortlessly elated the audience.

The show was opened by student performer Amanda Fama, who sung original and quirky upbeat love songs that provided a good transition for the headlining act, Nelly’s Echo.The Nigerian-born singer joined the stage with bongo drummer Trevor, who he affectionately nicknamed “Mufasa” by the shows completion. Almost immediately, he was able to cast his spell on the crowd with a beautiful rendition of Bill Wither’s “Grandma’s Hands” and “Ain’t No Sunshine” while the spectators clapped with delight.

“It was really good. He included the audience a lot and was able to be funny while at the same time free styling a lot in his songs,” sophomore Shelly Coy said.

Nelly’s Echo had an unmatched stage presence that every audience member could have easily mistaken for a one-on-one conversation with the artist himself. He was witty and quick on his feet, adding a dynamic of great comedic timing to an already grand display of showmanship. He made everyone laugh by picking on the audience a bit, leaving the audience with positive memories after a wonderful experience.

“I walk into a room and the whole crowd sees me as a stranger, but by the time I’m done we’re all family and friends; music brings everyone together and that’s the best part for me,” expressed the passionate performer after the show.

Nelly’s Echo let the group in on the stories behind his originally penned songs, making it very personal; the vibe of the room reflected that. He was able to blend two different songs with other known songs, as well as include his own lyrics that he thought up on stage. The songs were enchanting melodies that soothed the mind and mended the soul with every guitar pluck and drum hit.

“I went to NACA, which is a conference where we go to pick performers, and Nelly’s Echo really stood out by engaging the audience. Everyone had a good time and that’s why we chose him,” Co-music Chair of the CPB, Amanda Pantone, said.

The tight-knit audience found themselves clapping and snapping to the songs, feeling completely comfortable with the positive energy that filled the room. Nelly’s Echo was a one of a kind act that infused a warmth and spirit that is unfortunately hard to come by in many performances. The College Programming Board looks to bring more performances as exceptional as this one to Ramapo in the future.

“Winning a Grammy isn’t going to make me happy. What will make me happy is making music,” Nelly’s Echo articulated while on stage.