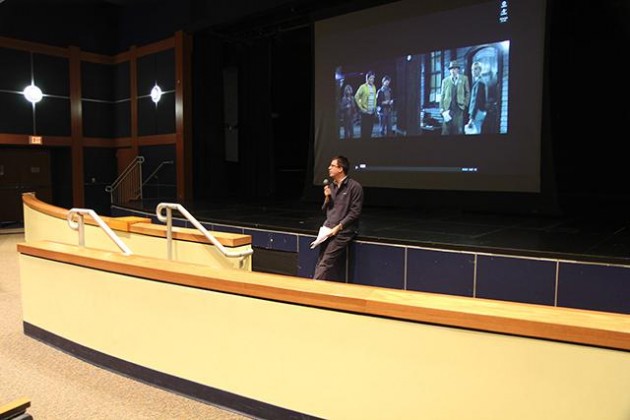 Professor of Communications Neel Scott sought to dispel myths about experimental film in his lecture, “Cinema + Sound: Finding the Cinematic” on Friday.

Experimental film is often associated with a series of nonsensical and confounding scenes that have little point or purpose; however, Professor Scott attempted to convince students that experimental films often have a strong sense of purpose.

Scott showed a series of clips ranging from J.J. Abram’s “Super 8,” to amateur Russian dashboard videos, to his own acclaimed films to explore the fine line between real life and cinema on Friday.

The lecture began with a clip of “Super 8,” which demonstrated the theme of everyday life and film interconnecting. The clip in particular portrayed the group of kids making their film, hastily preparing to include the unplanned arrival of a train rushing through the station. Despite the fact that the train detracted from an otherwise emotional scene, the young filmmakers were attracted to the fury and realism that the passing train presented.

Scott moved on to a real life example of “stranger than fiction” events caught on film by showing various clips shot by Russian dashboard cameras demonstrating how real life events can be just as unbelievable as a scene written in a script. The dashboard cameras were installed by many Russian drivers for insurance purposes to prove when people voluntarily run in front of cars, and in the process, has provided footage of shocking, unexpected moments, including the meteorite that hit Russia in February of this year.

This transitioned into a discussion of how the dichotomy between film and reality bleeding into each other influences Scott’s own filmmaking.

Scott screened excerpts from his short film, “There Was a River,” which uses actual footage to detail the construction of Lake Powell, a reservoir that was created through the flooding of Glen Canyon in the early 1960s. A series of clips from the 1950s to the present demonstrates the drastic changes that man imposed on the beautiful gorges of Glen Canyon, which is now submerged in 500 feet of water and has become a popular vacation spot.

“There Was a River” is an experimental film, as it is a montage of clips without an established order. Nevertheless, it effectively communicates the idea of past and present and the effect humans have had on the earth’s natural landscape.

“Rural Excavation” is another montage-style film that Professor Scott directed and highlighted in his lecture. The project was inspired by the Voyager space probe, which was launched into space in the 1970s and is still traveling through the universe nearly 40 years later.

NASA included a “golden record” of songs, artwork and other data that represented society, which influenced Scott to compile a series of clips that he felt would, “archive what the world had been, and what it had become” in the wake of a hypothetical cataclysmic event.

Scott also showed a clip from “The Love Hunter,” which he was the sound designer for. He explained how he doubled the volume of certain minute details such as the crinkling of a plastic bag or a car door slamming shut.

Scott claimed that by editing sound, one can, “create a heightened sense of reality, a textured world.”

Scott closed the presentation by giving his own definition of cinema.

“Cinema is often defined by two characteristics: ‘that was like a movie,’ and ‘stranger than fiction.’ While these are opposite statements, my definition of cinematic is reconciling the two, which puts the viewer into reality.”