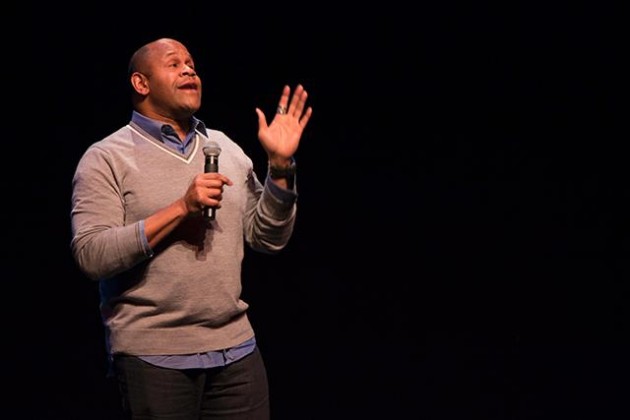 Celebrated comedian and actor Rondell Sheridan appeared at the Berrie Center last Saturday showcasing his comedic talents. The funnyman came supplied with a wide array of jokes about everything from faulty technology to relationship woes.

Sheridan understands that in order to make an audience laugh, one must have a connection with the audience, as he went on to explain in his show. Sheridan did this by comically pointing out how the words “Mahwah” and “Ramapo” sounded like names made up by someone suffering from a stroke.

“It was a pretty good show; it was a nice way to relax on a Saturday night. I’ve seen Rondell on television before but never being a comedian,” Daniel Monfiston said.

Although Sheridan is best known for his role as Chef Victor in the Disney channel show “That’s So Raven,” his body of work extends far beyond that, as he is a Marquette-educated man with experience in theater and other acting roles. It became clear early on in the show that Sheridan was a seasoned veteran of the stage using traditional stand-up techniques that engaged the audience.

Throughout much of the show, he lingered on the topic of aging, something that is universal to everyone. Whether it be the awkwardness of going to the gym as an older person or the inability to do certain things at an advanced age, it was a common theme and a funny one at that.

The highlight of the performance was the way that the comic wittily took the thread the audience gave him and wove it into humor. To the dismay of one Ramapo student, Sheridan picked on her multiple times throughout the show because of the uncertainty of her future, but it was, of course, lighthearted.

“I thought it was very funny. I came to the show because I knew him from ‘That’s So Raven,'” said sophomore Sabrina Castro.

What was very unique about the show was that after his set, Sheridan came back to his adoring audience and participated in a question and answer session. Sheridan took care in all of his answers and made sure that he got around to everyone. It was different to see a comedian take the time to talk about his life and experiences after a relatively long show.

“It’s the thing [comedy] I was good at without knowing how to do it,” expressed Sheridan after the show. “I was always the funny kid and I just couldn’t not be funny.”