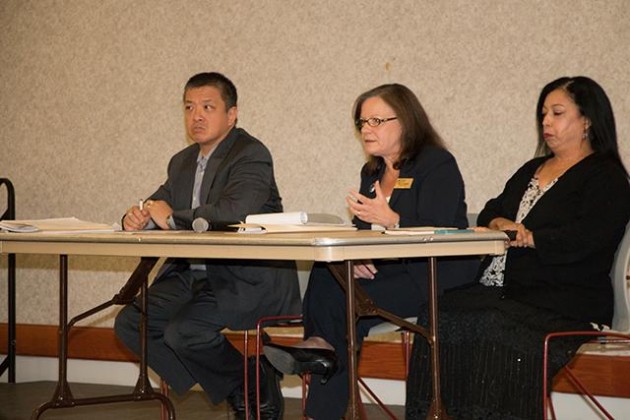 A string of incidents at the Village characterized by mass gatherings, vandalism and alleged intoxication prompted an open forum held by the Student Government Association Wednesday. Students and college administrators assembled at Friends Hall to discuss issues of public safety at the housing complex.

“We want students to have positive out-of-class experiences…but it needs to be in a safe environment,” said Associate Vice President for Student Affairs Miki Cammarata. “What was different about these incident reports was the sheer large numbers, the conduct of students, the number of people who weren’t our students who were also contributing to this rather unruly and hard to control environment.”

Students were able to ask questions and make suggestions to a panel of administrators that consisted of Cammarata; Patrick Chang, associate vice president for student affairs; and Director of Residence Life Linda Diaz. SGA President Vinny Guinta moderated the forum.

In an email addressed to residents Oct. 17, Chang stated Public Safety would commence regular evening patrols in the Village and prevent non-residents from gathering in large groups at the complex. The email also mentioned that preventative measures would be discussed at an open forum with SGA.

“The Oct. 17 email was prompted by a series of recent overcrowded events in which the decisions of a few living in the Village apartments put others at risk,” said College spokeswoman Anna Farneski. “It is important to note that three apartments out of 153 on campus are responsible for the issue. They will be held accountable.”

Chang said college officials received reports of groups of several hundred people gathering outside and inside Village apartments, students preventing residents from gaining access to their units and vandalism to the grounds and parked cars.

“In addition to this, we have seen evidence of intoxication where students had to be hospitalized, most of them underage, and also the recurrence of large containers of alcohol… identified as jungle juice,” Chang said. “We couldn’t have this continue on.”

Other issues included large amounts of garbage in the quad every Wednesday and Friday morning and students charging admission to enter apartments, a violation of Residence Life policies stating that students may not conduct business out of residence halls.

“We hoped this would diffuse the number of times Public Safety had to come visit. Most people respected that, but we started noticing a couple of patterns that were a concern to us during the course of the semester,” Chang said. “It seemed the standard was being reinterpreted as the Village is now a safe zone that is protected, that Public Safety will never come to…that is not true.”

As part of the agreement, Public Safety maintained usual patrols in the Village throughout the year, but did not increase its presence during warm weather months as it has in the past. Patrols during this time were instead kept to the perimeter of the complex and did not include the quads.

However, after college officials received complaints from students that noise levels in the Village were interfering with their education, it restored Public Safety’s presence at the complex to previous levels.

When incidents occurred again this past weekend, an interim suspension policy was invoked.

“The College has an ethical and legal obligation in this case. We can’t let an event like this continue going on when lives are at stake,” said Chang. “Underage minors being served alcohol, large gatherings where people are getting injured, vandalism is occurring-we need to take immediate action.”

The panelists said they are willing to discuss new actions to be taken at the Village, and that the present rules are not necessarily permanent.

Students voiced their concerns and suggestions for future administrative action at the open forum. Senior Andrew English told attendees that students were afraid of Public Safety after the increased presence.

In response, Cammarata said it was not the administration’s intention to invoke fear or intimidate students, and that it encourages discourse between college officials and students.

“We value this kind of interaction,” Cammarata said. “We need to take immediate action about the safety issue, but continue to have conversations like this about how we create a more positive environment in the Village.”

SGA Senator Kevin Cottino argued before the panel that the administration, not public safety, is overextending its influence over the informal aspects of students’ college experience. In turn, he said, students are deterred from living on campus and from recommending Ramapo to others.

Guinta said he felt students offered many positive suggestions at the forum, and that the SGA would do its best to bring that input to college officials.

“We want to follow up with administrators on what we feel was the productive feedback and craft something that deals with the problems and also solutions that we feel would be efficient,” Guinta said. “There is an agreement to disagree between students and administration on their responsibilities, but we don’t see that as a reason to not work together to accomplish a compromise.”