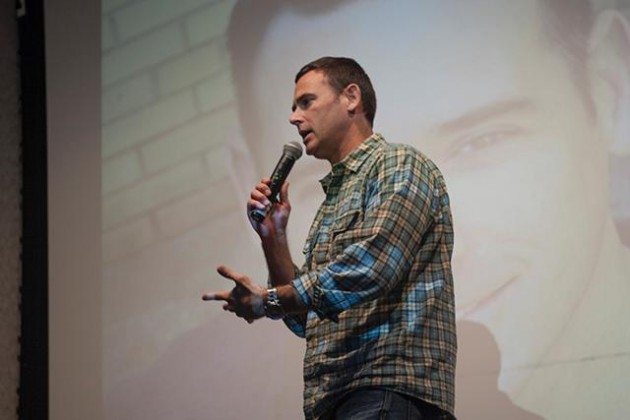 Ramapo students enjoy a good laugh every now and then, but no event on campus created a roar of laughter quite like comedian Andy Hendrickson’s performance on Tuesday night.

Hosted by the College Programming Board, this event encouraged Ramapo students to appreciate their wild senses of humor. When asked why they attended Hendrickson’s show, freshmen Alexis Johnson and Gina Smith responded that “they needed something to do.” In contrast, Hendrickson’s show was not just “something to do,” but it was a performance that brought out the best in both the performers and audience.

Junior Kyle Baton opened the show by joking about the different ways in which male and female students drink alcohol. Baton said that “when guys start drinking, there’s a lot of food, sweat and some overweight guy who smells like hot dogs.” However, “when girls start drinking,” the event becomes more similar to the halftime show at a football game because of “the ever-present drunk girl randomly singing popular songs at the top of her lungs.”

After Baton finished his act, Hendrickson took the stage with his own style of comedy. Madeleine Maas, another freshman, admitted that she and her friends “like to laugh.” The students in attendance definitely laughed, many of them admittedly until their sides hurt or their mouths became sore. Hendrickson used his colorful, often bawdy comedic style to make his audience laugh.

Freshman and CPB member Ehi Igiehon also admitted before the show that he “liked to laugh” and would enjoy Hendrickson’s show. The comedian joked that British people drink tea with near-religious fanaticism. Hendrickson, using his typical approach to comedy, joked that America “got back at the Brits” by inventing iced tea and adding tons of sugar.

Later, Hendrickson described a trip to a vineyard in which some people could easily distinguish the flavor of their wine – for example, Hendrickson described how one person could taste a hint of Asian pear in the wine. The humor in this joke, however, stems from Hendrickson’s trip into the vineyard, when he only saw grapes, “with neither a pear tree nor an Asian person in sight.” Although some attendees were insulted, Hendrickson generally stayed away from offending his audience.

Despite the fact that “his friends told him to come here,” freshman Kevin Diana enjoyed the show because of Hendrickson’s jokes, including one in which the New York comedian alluded to the Tootsie Pop commercials of the 1960s and 1970s while describing the various stages of a relationship.

Sophomore Hannah Ovadia attended the show because “she was on the College Programming Board,” but her involvement was not the only reason that she attended the show. Ovadia laughed along with her fellow audience members after hearing Hendrickson’s joke about paid dating sites.

Many would agree with Hendrickson’s realization that the only person you find on a site like Match.com with only green dots (one hundred percent compatibility) could as well be your own crazy self. Hendrickson also created an eruption of laughter through his joke about the popular site Yelp! (a website created to sell services via the Internet). Ramapo’s students definitely found themselves laughing at Hendrickson’s idea that Yelp.com was “not the best place to find a surgeon who will shoot lasers into your eyes.” In all, Hendrickson’s laugh riot may have been the funniest Tuesday Night Live on record.