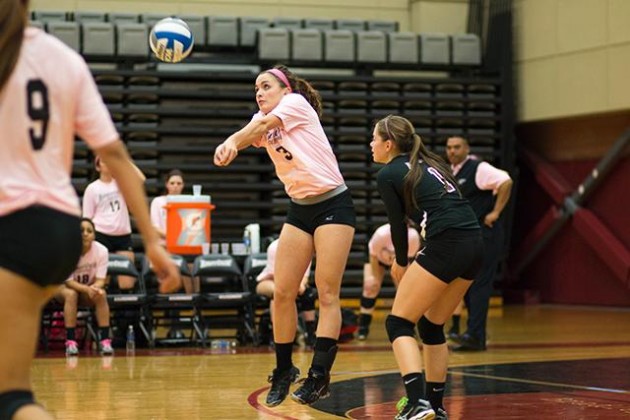 The Montclair State Red Hawks eliminated the lady Roadrunners volleyball team in the first round of the New Jersey Athletic Conference Tournament on Tuesday.

Montclair swept Ramapo in three sets, 29-27, 25-13 and 25-21 to advance to the semifinal round of the NJAC tournament and will play top-seed Richard Stockton on Thursday.

“We’ve had trouble closing out games,” said junior outside hitter Sara Pendleton. “We had a tough time finishing when we had a lead in this match, and that’s been a problem all season.”

Ramapo had Montclair on the ropes early, but could not score the winning point in the first set, as Montclair battled back from a five-point deficit to take the game in extra points.

In the second set, Ramapo fell behind 9-2 early on and was not able to get back in the set, facing a nine-point deficit at 22-13. Montclair scored the next three to take the set 25-13.

“We put so much effort in the first set, and when we lost it we didn’t come out strong for the second,” Pendleton said.

The third set was a see-saw battle that saw the score tied eight times before Montclair was able to break away, winning 11 of the last 18 points to eliminate the Roadrunners from the tournament.

Sophomore Kaitlin Mac Iver led the Roadrunners with 30 assists in the match.

Despite the loss, the Roadrunners had a consistent defensive effort from the whole team, as only one player was not credited with any digs.

However, the team’s defensive effort was not enough to stop Montclair freshman Melissa Terpstra and senior Marta Topor, who registered 22 and 11 kills in the match respectively.

“There were times where those players had no blockers,” Pendleton said. “She was able to hit where she wanted when they got us stuck in our rotation.”

“It was a tough loss, but we will remember it and come out stronger next year,” Pendleton said.

The Roadrunners have made the NJAC Women’s Volleyball Tournament each season since 2006, all under current head coach Robert Pichardo.

This year, Ramapo entered the tournament as the fifth seed, with a 4-4 NJAC record and 16-16 overall.

Montclair goes on to take on the top seed and tournament favorite Richard Stockton, who has won the tournament each of the last five years and seven of the last 14.