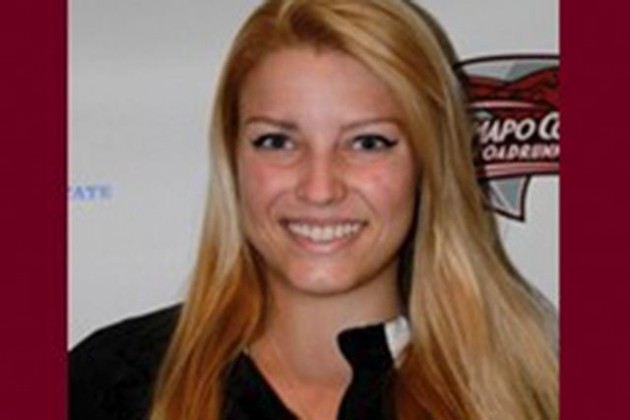 Despite a loss to Montclair in the first round of the New Jersey Athletic Conference women’s volleyball championship tournament, Ramapo junior opposite hitter Sara Pendleton was named as an honorable mention for the 2013 NJAC all-conference team.

Pendleton, a sociology major, finished the season with 246 kills, 63 digs, 60 blocks and four assists to earn her second honorable mention to the all-conference team in three seasons. Her first came in her freshman year.

During her freshman year, she had 171 kills, a team high of 78 blocks and 12 aces, and she was once named the NJAC rookie of the week.

In her sophomore year, injuries limited Pendleton to only 11 matches, but she still placed third on the team in kills and blocks with 81 and 26 respectively.

Despite her individual success, Pendleton said that the team was not happy with their season.

“We lost a lot this year, even while we were playing well,” she said. “We have a lot to do for next year, but by then most of the team will have played together for three years and it will be our second year with our freshmen. We will finish above .500.”

Pendleton said that the highlight of the season was the team’s match against Kean University on Oct. 10.

“We did really good, everyone worked really hard together and we played as a unit. They were ranked second at the time and nobody thought we were going to beat them,” Pendleton said.

Ramapo came from behind after losing the first two sets, then battled back, including a 25-10 smacking in the fourth set. Pendleton lead the Roadrunners in the match with 14 kills.

Pendleton, who was captain of her team at Rutherford High School, said that she wants to earn first or second all-conference team honors next year, not just an honorable mention.

“I’ve gotten this award twice already, so I think if I start playing better sooner in the year and come out ready at the start I can accomplish that,” she said.

While at Rutherford, Pendleton was named to the all-county team three times, earning first team honors twice, and she set a school record for blocks under coach Helen Antzoulides.

Pendleton said that her sister, Amanda, plays volleyball at Rutherford now and has also done well in the program.

“She’s definitely into volleyball, and when I left [Rutherford], she took my number. She plays under the same coach and it’s cool to see the two of us go through that program and be successful.”