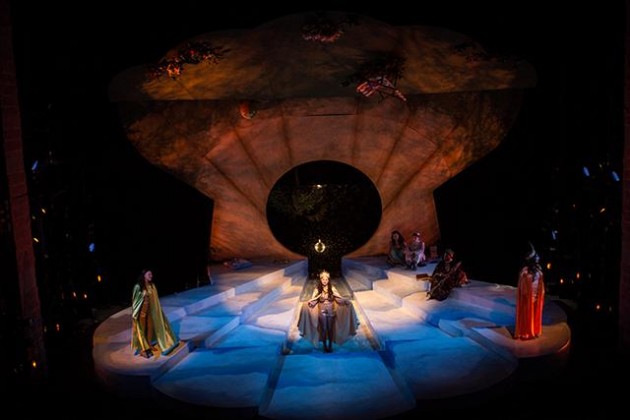 Last weekend was the opening for the theater program’s student production of Shakespeare’s “The Tempest.”

Greg Steinbruner, who previously directed “Birds” in 2010, directed the show.

“The Tempest” centers around Prospero, a duke who was betrayed by his family. Because of his family’s disloyalty, he is exiled to a deserted island with his daughter, Miranda. In addition to being royalty, Prospero is also a sorcerer who uses his power to conjure a plot to exact revenge on his betrayers and regain his rightful title of Duke of Milan.

In this production, Prospero is played by senior Malcolm Minor. Minor expressed that this role has changed his abilities as an actor.

“He is truly the king of emotions, from going from extreme highs to extreme lows and all the confusion in the middle. It’s also been a very draining experience. However, the character has really challenged me and my acting skills and what I can do,” Minor said.

The island’s other inhabitants include Caliban, a half demon, half man, and Prospero’s unruly slave, and Ariel, a spirit who works as his somewhat-willing servant.

For actor Ryan McGilloway, his role as Caliban offered him a chance to really dig into a complex character.

“He’s such an interesting person. He’s both the antagonist to Prosperous and a clown. He’s dynamic and complex, which is something I didn’t see right away,” McGilloway said. “I loved playing all of his emotions: hatred and fear of Prospero, his love of Miranda, his admiration of Stefano. Caliban isn’t completely human, so that’s another layer that was exciting to play.”

One of the most interesting choices made in this production of the show was to have the character of Ariel be played by three separate individuals, when it is typically played by one. The three actresses portraying Ariel often finish each other’s sentences and speak in unison. The role was jointly played by sophomore Jenna O’Brien and freshmen Julie Roccanova and Liz Gonzalez.

“With three people working on the same role and having different availabilities, rehearsals were pretty interesting,” O’Brien said of the rehearsal process. “When one of us had another engagement and wasn’t present, the other two would have to adjust accordingly. I think this actually was beneficial especially for learning our lines.”

A great deal of effort went into designing the look of the play. The set is a giant scallop that encompasses the entire stage. The top half of the scallop is painted to resemble the ground, complete with grass and upside down trees, while the bottom half represents the sky. The design is meant to represent the feeling of a world turned upside down by Prospero’s magic. In addition, the eponymous “tempest” that opens the show features heavy use of strobe lighting to create the storm that brings the rest of the characters to Prospero’s island.

If you missed the show last week, you still have a chance to see it this weekend, as it will be performed at 8 p.m. on Thursday, Friday and Saturday in the Sharp Theater.