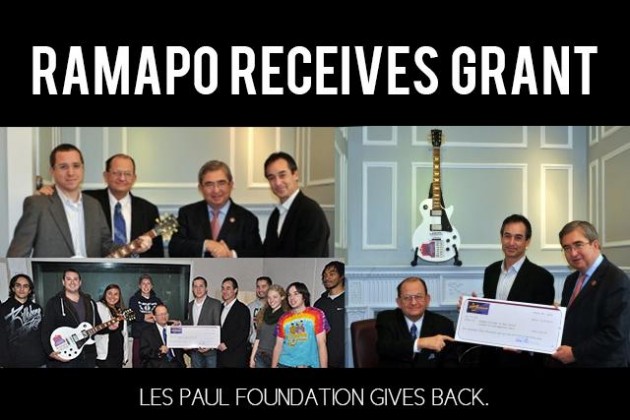 A customized Ramapo and Les Paul Foundation Gibson Les Paul guitar and a check were presented by Michael Braunstein, executive director of the Les Paul Foundation and Rusty Paul, Les’s son, to President Peter Mercer to represent the upcoming creation of a music studio “that will educate the musical luminaries of the future in a hybrid facility that bridges the worlds of analog and digital sound,” according to a press release by Ramapo College.

“This generous gift from the Les Paul Foundation will provide our students with a broad historical foundation of industry standard analog technologies while taking advantage of tremendous developments in digital technology,” said Mercer. “It presents the best of both worlds.”

The new studio will have the most contemporary computer control and recording practices. It will feature a hybrid digital/analog console that will give students the opportunity to experience classical, historical and foundational mixing techniques.

“We know that this grant from the Les Paul Foundation will foster Les Paul’s legacy through the advancement of technology at Ramapo,” said Braunstein.

Paul, who excelled as a performer and technologist, lived in Mahwah.

“Les Paul would be honored to see how his life will now influence so many students of tomorrow,” said Braunstein. “He was always inventing, creating and looking to the future in everything he did.”

The studio will reflect Paul’s gift for inventing and creating with modern technology, including reel-to-reel tape and analog reverberation, “but modernized with state-of-the-art digital control,” the press release continued.

The studio will help students learn about many different aspects of creating and recording music.

“We concentrate, in the tradition of Les Paul, on the whole musician,” said Assistant Professor of Music Seth Cluett. “We teach audio engineering, live sound engineering and music production to people who are themselves singer songwriters, pop musicians, hip hop producers and DJs.”

Production courses at Ramapo use Paul and other artists as inspiration and models of musicians that have succeeded as performers and technicians.

The Ramapo College music program will co-host the annual Les Paul Tribute Festival to celebrate the legacy of Les Paul through education and performance. This year’s festival will be held February 5 to 8, 2014. The event includes guest lectures, master classes and concerts in the Berrie Center’s Sharp Theater.