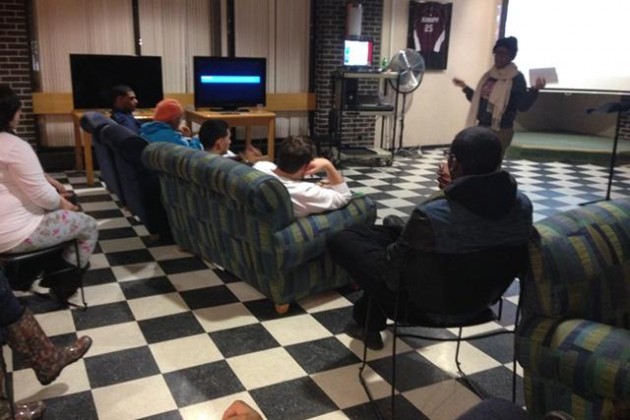 Several students gathered on Monday to read their personal submissions to the Diversity Monologues contest aloud, sharing their unique life experiences and stories.

“I like to think of my work as a form of civic engagement and community service. Every room needs at least one black girl,” began sophomore contestant Marissa Hatten.

Hatten was one of many to share her story at the Diversity Monologues sponsored by the Women’s Center to kick off African Ancestry month.

“Especially in history classes. If I weren’t in history classes, where would people look when slavery was brought up? My position as the only black girl in the room is an asset to most,” said Hatten. “If a non-black person befriends me, I can become their black friend, and thus, be the impenetrable suit of armor against accusations of racism. If they have a question, I can answer it because little black girls are programmed at birth to explain any and all answers to questions about African American culture.”

The striking absence of noise confirmed what everyone in the J. Lee’s lounge was thinking: this young, charismatic girl had spoken truths about a topic that most people fear or frequently avoid talking about.

Although Hatten’s piece is a developing work in progress, it explored concepts of black identity and her experiences with racial microaggressions over the years. Her unapologetic monologue, from the perspective of the only black girl in the room, especially in a college setting, left the audience speechless.

“It was so raw and personal,” said Adlyn Maldonado, a senior who hosted the event. “It was something that I could relate to, and I appreciate that she wasn’t afraid to talk about what it’s like to be a person of color in the classrooms at Ramapo. I think people listened with open ears and accepted what was being shared with them.”

“Stephanie Hernandez and I, we went to a conference last year called NCORE, which is the National Conference of Race and Ethnicity. We were introduced to the Diversity Monologues there,” Maldonado explains. “It was during one of the workshops there that a professor from another school suggested we bring the event to Ramapo.”

The monologues, written and performed by Ramapo students, explored concepts of identity through dimensions of race, ethnicity, gender, religious beliefs and other ideologies. The majority of the contestants agreed that getting all of their thoughts onto paper was not easy, but shared the inspiration for their pieces.

“I just wanted to write about my identity and how it affected me growing up. I really tried to bring that into my monologue and talk about how being a Pakistani-American affected me,” said Misha Choudhry, a sophomore contestant.

Other writers also shared the driving force behind their pieces:

“I think what was interesting about my piece, because I talked about how people perceive me and how people speak to me because of my identity, is the audience’s reaction,” said Hatten. “People from the audience spoke to me afterwards saying things like, ‘Oh, I did that,’ and ‘I’ve said that to a black girl before-I feel so bad!’ To an extent, I feel like people understood what was going on and digested it, but they needed someone to help them chew the whole bite.”

The performers admit that the event has room for improvement, but believe in its future growing success for the upcoming year.

“For the people who actually got to speak their voices, it was a cathartic experience to express something that no one wants to hear usually,” said Hatten. “There’s a certain pressure to writing about yourself, going up there in front of all these people, and bearing your soul in a way that you usually never get the chance to. It’s nerve-wracking and very alienating, but it’s so important that this comes back to campus because people need to be able to talk about these things and have others hear them. There are so many more stories that people can tell.”

Radwa Abdallah, a junior contestant, agreed that the importance of this type of event is to give students the opportunity to openly discuss their differences.

“I remember when Stephanie asked me to tell her why I think the Diversity Monologues are important,” added Abdallah. “And it’s because then you can see the differences between people, even if they are from the same culture, or if they grew up in the same society and community as you did-you can also find similarities across cultures and across different backgrounds.”

Diversity, encompassing acceptance and respect often means understanding that each individual is unique. It is no wonder why the Women’s Center, a center for social justice, was behind it all.

“The Women’s Center works to bring equality to groups who have been marginalized and oppressed; the monologues helped bring students’ experiences with identity to the forefront, which is what we’re trying to accomplish as a center,” said Maldonado. “I really hope this becomes an annual event because it has the potential to be really good, really monumental just because of the message that we’re trying to send.”

At the conclusion of the night, three winners were chosen of the six contestants: first place to Misha Choudhry, second place to Marissa Hatten, and third place to Gerson Lovera. The winners will have the opportunity to perform their submissions at the Diversity Convocation luncheon, which will be rescheduled for a later date this spring.

“What I liked about it was that it sort of forced people to sit there and listen to what you had to say, and for people to listen to a variety of stories and monologues, you really got to hear people’s voices firsthand,” said Choudhry.