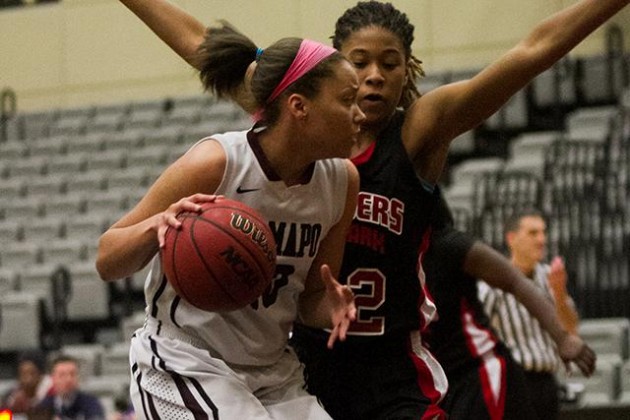 The Roadrunners have now won two in a row after losing three straight. They earned a 74-47 win against the Scarlet Raiders, and got contributions throughout the lineup. Leading scorer, senior Micaela Moore led her team with 25 points, while junior Jackie Jerkovic and senior Anna Fucci came in second with 11 points each.

Rutgers-Newark junior, Jade Howard, lead the Scarlet Raiders with 12 points in the game.

This was a big win for the Roadrunners, as they clinched a spot in the NJAC playoffs. Head coach Mike Eineker said, “The team played exactly the way we wanted them to play, which is inspiring to us as coaches; we played hard and with energy. It was also a win that got us into NJAC and that was one of our goals.”

Getting to the NJAC tournament has been a struggle for the Roadrunners in recent years. They made it last year, but lost in the first game. Their coach is extremely proud and is excited to see what this year’s playoff brings.

“It’s a good feeling knowing we’re there. It hasn’t happened a lot for us historically, but it was a goal of ours for the season,” Eineker said.

Their season has been up and down, winning some and losing some, but tonight they came together as a team and showed what kind of team they are. Working together and making all the right plays paid off. The Roadrunners kept a huge lead against the Scarlet Raiders the entire game.

“We showed them the kind of team we could be. Last year we lost against Rutgers in the NJAC playoffs. It was a great feeling to know we could beat them, and beat them by so much.” said senior Anna Fucci.

Fucci, who was on the team for the last two seasons, is playing in her last season with the Roadrunners. “I have one more game left with this team and tonight made it so much harder to leave. We’ve come a long way since the beginning of the season and our hard work shows off.”

The post-season clinching win was only one of the victories the Roadrunners earned on Wednesday. The team dedicated their game to all the people fighting for their lives with Breast Cancer by wearing pink shirts and pink socks to honor those who fight the battle with cancer.

The Roadrunner’s next home game will be next Wednesday at 5:30 p.m. in the Bradley Center when they take on William Paterson on senior night.