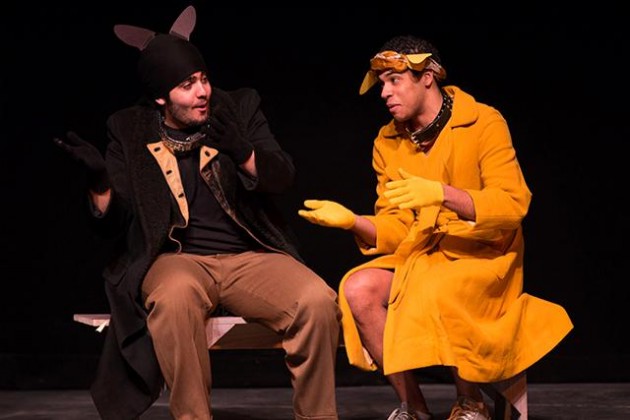 This semester’s 24-Hour Playfest hosted by Alpha Psi Omega began this past Saturday and finished on Sunday afternoon. Participants in Playfest were given a song, this year’s being “Valerie” by Amy Winehouse, to inspire the creation of short plays. The criteria this year was different than previous years, as the organization was experimenting with a new format.

The first of the full-length shows was written by junior Brian Petty, directed by Michael Lingle and starred Steve Fallon, Julia Roccanova and Tommy Barbara. The performance was about a high school student named Valerie who had a great amount of promise until entering college, when her mother suddenly passed away, causing her to drop out of school and land on the path of drug addiction. The performance alternated between the narration of Valerie’s teacher and her experiences backtracking from her untimely death. The multi-scene play merged the two parallel storylines that finally intertwined at the character’s graduation.

“It was a challenge to remember a multitude of lines with such short time to rehearse and prepare,” said junior Steve Fallon.

The second performance was written and directed by Dan Kropa and starred Nick D’Ambrosia, Jenna O’Brien, Jordan Edwards and Caroline Harvey. The actors portrayed pet dogs, one on the brink of being neutered, and the show followed the interaction of the dogs and the touchy subject of being fixed. The relationships of the group are strained and romantic connections muddied.

The third and final play, also written by Kropa and directed by Nick Walsh, starred Warren Dolan and Kropa himself. The performance centered around two unborn twin brothers who discuss “the facts of the universe” only to forget them upon their birth despite how much they struggle to remember. The facts, however, are not of monumental importance but reveal odd “truths” about mostly people but also a wide variety of subjects.

The 24-Hour Playfest, which took place in the Sharp Theater, was a culmination of the hard work of student playwrights and actors who had little time to prepare their material. The event occurs every semester, and Alpha Psi Omega hopes that in the future it will gain even more exposure for the benefit of the performers and the student body.