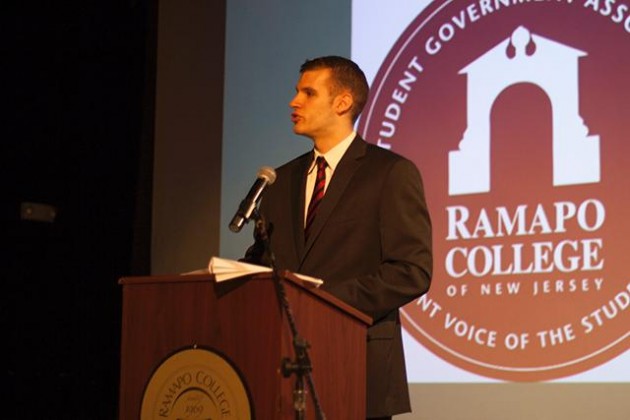 “The key [to my presidential term is a] greater awareness of what the student government does for them,” Guinta said.

Guinta continued to say that he yearns for a “better understanding of what students want changed.”

By providing a community for residents and a caucus for commuters, Guinta looks to have Ramapo students continuously give SGA feedback about what the College could do better.

In the address, Guinta outlined the goals of SGA, including expanding off campus shuttles, revising the alcohol procedures and structures, and hosting a CPB year-end event for Ramapo students.

The address also discussed Ramapo’s image on a state level.

Guinta said that he strives for “improved visibility on a state level.”

Guinta cited Governor Chris Christie’s visit and holding a statewide student government conference that included schools such as Princeton and Rutgers as examples of events that help Ramapo have a bigger, better image.

“One thing I learned was that we have similar problems with N.J. schools,” Guinta said. “And there are a lot of different ways to approach them. “

The second half of the State of the Student Address was a presentation on fund reformation.

Student trustees Kevin Ng and Anthony Darakjy informed the audience of the College’s need for state funding. They went over various statistics about higher education in New Jersey during this discussion.

Ng and Darakjy informed the audience that out of all of the states, New Jersey has the greatest number of students that travel out of state for college with an average of 30,000 students not attending in-state schools. Since students are most likely to work in the state they go to college in, there seems to be a deficit in New Jersey.

Ng and Darakjy went on to discuss the Building our Future Bond Act distribution. Ramapo received $18 million from this act, while a college of a similar size, TCNJ, received $57 million.

“What can we do? Register to vote, 1 p.m. on Thursday at the Student Center!” Ng said. “You could also write to your state legislature. Go to the SGA office to get the contact information. And also stay informed.”

Some students in attendance did not feel that the State of the Student Address was very relatable to their daily life at Ramapo.

“I felt that it was a lot of political mumbo-jumbo,” said Kyle Garbely, a junior. “It’s good to be politically aware, but there was a disconnect between the average student and what’s going on behind the scenes at Ramapo. They didn’t do a lot to bridge that gap.”

“The most important thing they achieved was telling us the right place to go to get the answers,” Edward Gullien, a sophomore, said. “But I don’t feel I had many questions answered.”

Other students, including Victoria Stanton, a sophomore, found the State of the Student address to be positive and relatable.

“I feel like all the speeches were very well given. I was rather surprised,” Stanton said. “I will definitely stay informed by SGA.”