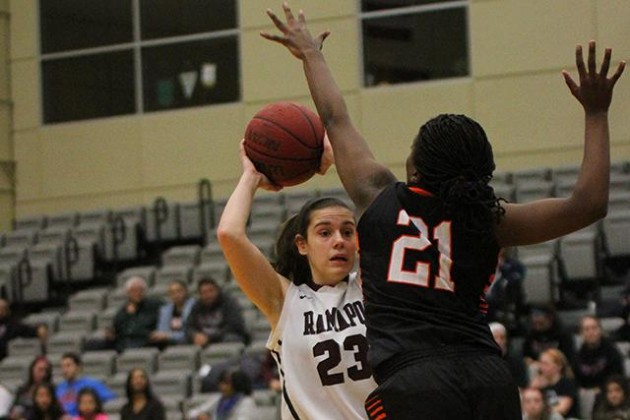 “We played very well versus WPU, but not good enough to win,” said head coach Mike Eineker. “I was proud of the way our team competed Saturday and all season. They were a team that played hard and played together.”

William Paterson played a better game and gave Ramapo more than a run for their money. Senior Floriana Borova led William Paterson with 25 points, eight assists and five steals. Sophomore Brittany Harden came in second with 17 points, and senior Dana Jeter came around with 11 points for the Pioneers.

It was a sad day for the lady Roadrunners as the team’s four seniors put an end to their college basketball careers. The four seniors–Alayna Donadio, Kelly Haspel, Moore and Fucci–will be missed by the team on and off the court.

“They’ve been exactly the kind of people you want to build a program, and I’m really going to miss them,” said Eineker of his senior class.

“I’m going to miss playing basketball, especially here at Ramapo, and the friends I made on this team,” Haspel added.

Donadio went on to reflect about the season as a whole and how important this game was to them.

“Before the game even started we knew it was going to be an emotional game regardless if we win or lose. If we won, it would mean we would be moving on to the semifinals,” she said. “If we lost, it would mean the season was over. Since we did lose to them a few days earlier, we were determined to avenge our loss and give it our all.”

The girls played the season with a sense of family. They had their fair share of ups and downs throughout the season, as most teams do. They played their hearts out and left it all on the court. They played with confidence and tried to get the NJAC tournament win, but WPU was triumphant.

Ramapo has now lost to the Pioneers three times this season. They played a tight game until the end, when William Paterson’s last few points came from the free throw line.

Overall, it was a successful season for the lady Roadrunners. Advancing to the NJAC tournament was a major accomplishment that hasn’t come around very often for the girls, and they will look to build upon it next year.