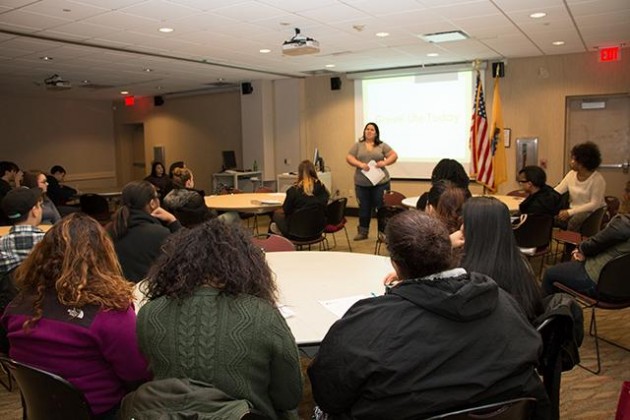 Several students gathered in the Student Center on Tuesday to learn more about Greek life, the LGBT community and how they intersect in an event entitled “When Gays Go Greek and Greeks Go Gay.”

As part of a new member initiative that began last fall semester at Ramapo, new interest members for sorority and fraternity life were required to attend at least three campus workshops that would help them become better acquainted with Greek Life ideologies.

Advisor of Greek Life Stephanie Hernandez and Queer Peer Services Coordinator Yovanna Garcia educated a room of students on the social stigmas of Greek organizations, the LGBT community and how LGBT students coincide with Greek life.

According to Garcia, the event was meant to shed some light on the fact that members of the LGBT community are often part of fraternities or sororities at Ramapo and colleges nationwide, despite a stigma that sometimes excludes them from the mainstream.

“I just wanted there to be more awareness that you can be Greek and part of the LGBT community, you can be both,” said Garcia.

Hernandez talked to the students with excitement and flair about her own experience with Greek life, while giving advice to the crowd about how to treat others with respect and avoid excluding people based on gender stereotypes.

Hernandez also emphasized the idea that everyone needs to feel comfortable where they are, and Greek organizations need to be aware of this and do their best to ensure that every person feels like family and finds comfort in one another.

“I would encourage you all to stay true to your values,” Hernandez said. “Play a supportive role to each other, and don’t tell each others’ secrets.”

Garcia gave a very informative talk about the LGBT community in general, highlighting that gender and sex are not the same thing, and that students need to be aware that every person is different.

“There cannot be one list to encompass everybody’s identity,” Garcia said.

Garcia’s emphasis on respecting and recognizing differences among peers, especially in the LGBT community, reached at least one audience member.

“There is way more to describe a person than I really thought,” said Audi Leiva, a sophomore.

Others were made aware of issues that members of the LGBT community have faced when coming out to their Greek organizations and feeling comfortable with them.

“I didn’t know that other orgs faced coming out problems with members,” said James Dik, a senior.

Overall, students seemed to enjoy the presentation that Hernandez and Garcia gave. The speakers made their points loud and clear about the intermingling of the LGBT community and Greek life and the problems that students might face when attempting to immerse themselves in both communities.

“The stigma is that the LGBT and Greek communities don’t mix or coincide, but they do. I know a lot of people who break the mold for that,” said Hernandez.