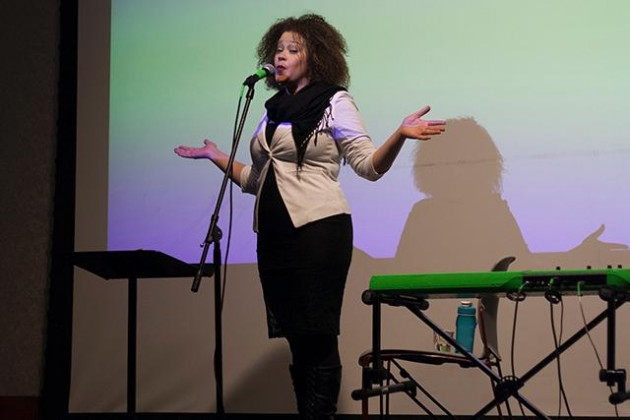 Kicking off Women’s Herstory Month was poet and spoken word artist Suzi Q. Smith who performed in Friends Hall Tuesday. The show was opened by freshman Gabrielle Perone, a singer and keyboard player. Perone belted out soulful renditions of “Girl on Fire” by Alicia Keys and “Lego House” by Ed Sheeran, setting the tone for the upcoming performance.

Hailing from Denver, Colo., Smith has traveled across the country performing, as well as teaching the art of spoken word poetry. Big-haired and broad smiled, Smith began the show talking about the social quirk that is the “compliment insult sandwich,” or when a person delivers a compliment that is also insulting.

The poet began lightheartedly, but as the show went on, she transitioned into darker material with heavy-handed social and political undertones. A number of her works had themes of injustice, including inequalities of race and gender or feelings about the terrors of warfare in our society. Smith was incredibly passionate, and her emotions were laid out on stage for all to see and take a part as they wished.

“It was very eye-opening, every word was true and you can tell that it came from the heart,” said freshman Pedro Ortiz.

The very crowded Friends Hall was moved by Smith’s words, which touched on a bevy of serious issues as well as funny anecdotes. Tied into her performance was a lot of audience interaction, which she prompted and encouraged throughout the show. She asked the crowd to sing, snap and emote any other sounds they desired to express themselves and be as much a part of the show as she was.

“It was really good, it’s all the feelings that everyone has in a bunch of poems that no one wants to say,” stated freshman Amanda Hlavaty.

It was a very emotional experience for everyone in the room. Smith’s poetry was electrifying and angry and painful; it was a bravely honest telling of poems weaved from anguish, observations and life experiences. An advocate for human rights went up on stage and allowed her onlookers to share their emotions about what she was saying and how it made them feel, a completely interactive experience bonding audience and performer.

“I write about everything…there is nothing immoral about being honest. I read the news and feel powerless and that’s when I write with my claws out,” Smith said.