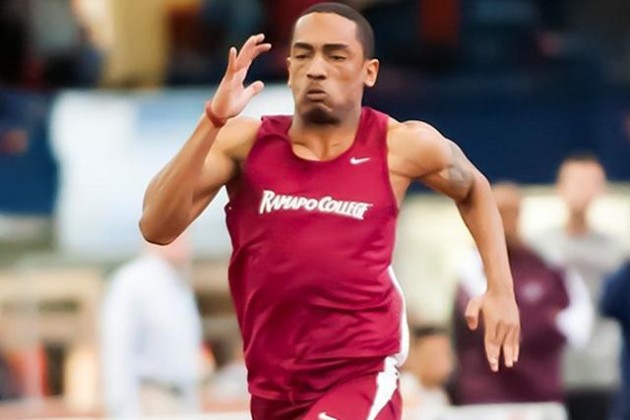 Ramapo College’s men’s and women’s track and field teams were on the road again this past weekend competing in the 2014 Eastern College Athletic Conference Indoor Track & Field Championships held at the Reggie Lewis Track & Field Center in Boston, Mass.  The ECAC, the largest conference in the nation, was founded 75 years ago and includes over 300 member schools from Divisions I, II and III.

“It’s more challenging than the NJAC (which took place the week before). If you perform well at ECAC, you should have a good chance to do well at the DIII Championships,” coach Mike Jackson said of ECAC competition.

Highlights of the championship include sophomore Phillip Dowell placing 8th overall in the triple jump, hitting 14.05 meters.  Dowell is NCAA bound with his school record of 14.55 meters last weekend at the NJAC Championships.

Another outstanding performance of the weekend was the men’s 4X200-meter relay team, finishing 10th out of 36 teams. The team consists of freshmen Kevin Diana and Marquis Harris, junior Daryl Ansley and senior Sean Ellis.  The four-member team clocked in at 1 minute, 31.06 seconds for the men.

Freshman Roland Gamez achieved a new personal best, placing 10th overall in the high jump with a 1.98-meter jump. Gamez has also just been named NJAC Rookie of the Year.

In the women’s events, junior Brittany DalCais earned first place at the Track and Field Championships in the pole vault.  Jackson said DalCais‘ performance was “one of the most exciting he has seen” and that her showing at the event was “good for her as she heads to the DIII Championships.”  She also achieved her own personal best jump with a mark of 3.78 meters.

DalCais and Dowell will head to Lincoln, Neb. this coming weekend, March 14-15, for the 2014 NCAA Division III Indoor Championships.

Other highlights from the women’s events included senior Taylor Furman placing sixth overall in women’s shot-put with a mark of 12.24 meters. Sophomore Emily Brock set a school record in the 3,000-meter race with her time of 10:36.55.

Jackson said the team’s overall performance at ECAC last weekend was “a great way to end the season.”

The Roadrunners will return to the track March 20-21 in Tampa, Fla. for the start of the outdoor season at the Bulls Invitational.