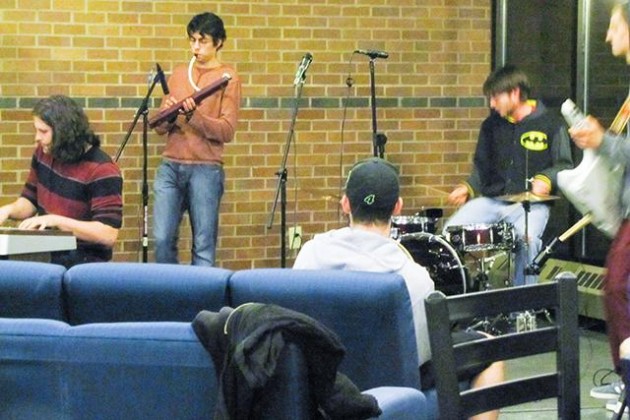 On a weekly basis, the lounge in Linden Hall is transformed into a tranquil coffee house where creative minds come to collaborate and perform. The evening began slowly with a few attendants meandering in and out, but as the night progressed, the room was livened with chatter, snaps, claps and music of all varieties.

At the start of the event, a culmination of musicians were simply playing instruments together in impromptu fashion, getting warmed up and acquainted with one another before more people arrived. It was purely a jam session that familiarized new people to each other and introduced them to their unique aptitudes.

The namesake of the Linden Hall Coffee House is of course the coffee, which was served in abundance to both performers and audience members and added a crisp aroma that permeated through the entire space, key to setting the mood.

The finest aspect of the Coffee House is the incredibly broad type of acts that are performed. Although primarily music, there is also spoken word, poetry and other readings. It is a welcoming environment for all types of artists from writers to musicians all coming together to sip coffee and exchange talent.

The lights were turned down low, and a relaxing vibe set in quickly, with no lighting save one or two closest to the performers at one point. One group performed never having played the instruments they were using and attempted a song with the comfort of knowing that it’s a place not only for novices to experiment, but for more seasoned players to perform as well. Another musician sang for the first time in front of an audience whilst playing the keyboard.

The literature and spoken word were received with traditional snapping while the musical acts were given a hand. One student scatted, which added yet another touch to the bevy of musical and literary stylings that were put on display.

At one point in the evening, the artists were competing with the audience who was abuzz with conversation, showing their instruments and discussing past and future acts. The combination of Open Mic Night and the Linden Hall Coffee House proved to be a worthy fusion as it brought together two communities of people. It is certainly a positive outlet for students to express themselves through their art and receive feedback from colleagues, who like themselves, are performing and sharing their music with the room.