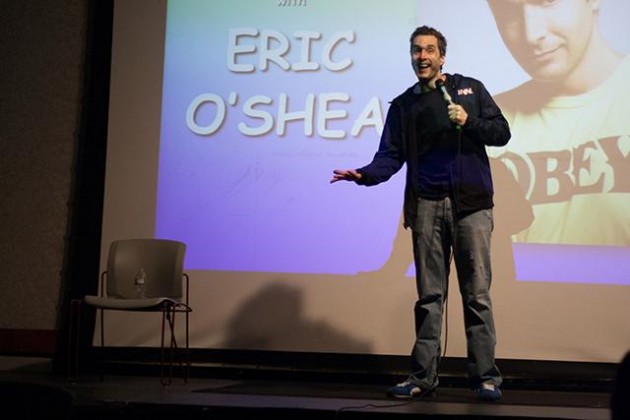 Comedian Eric O’Shea brought his nonchalant personality and famous “Songs for Commercials” skit to Ramapo on Tuesday night. O’Shea was lucky enough to have two amazing opening acts, consisting of a very talented female vocalist and a girl with the unique skill of being able to say any word backwards, and spell it backwards. It was definitely a very interesting night in Friends Hall to say the least.

O’Shea majored in sports broadcasting at Marquette University. After questioning his major, he traveled along the West Coast doing comedy gigs and ended up in New York City at Caroline’s Comedy Club. In 2007, O’Shea won the 2007 National College Comedian of the Year. These surveys are collected from about 5,000 colleges worldwide. His biggest skit, “Songs for Commercials” was performed Tuesday night. He also performed this skit with Betty White at the 2009 Creative Emmy Awards.

Many fans of both comedy and the opening acts filled up the seats at Friends Hall. The show started around 10 p.m. and O’Shea was ready to go at 10:30. His performance was more like a continuous conversation between him and the audience, and this is what made him very authentic.

He was very open to students making jokes on top of his jokes, which he thoroughly enjoyed because it gave him even more ideas. O’Shea stated that he really enjoyed performing for the Ramapo community.

Eric O’Shea, a returning act to Ramapo College, brought the audience to tears as he continuously made random jokes about his life and college students. With his witty remarks and his strange little “voices,” he really grasped the attention of the audience. Freshman Michael Pacheco said, “I really enjoyed his style of humor! He had good stories and used the energy of the audience to add to his already funny jokes.”

O’Shea was very interested in his audience and continued to connect with as many people in the audience as he could. The crowd was immediately comfortable with the performer.

“The audience was interacting with him the entire time, even adding some of their own jokes to his own,” said Pacheco.

The comedy show was definitely a success and some students, such as Pacheco, even said, “I would love to see him again and would have no problem going off campus to find him.”