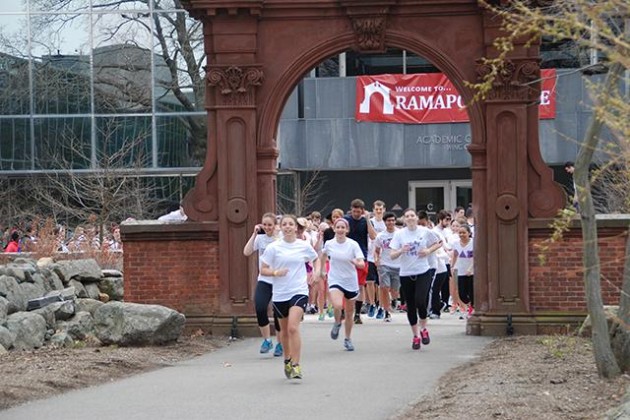 Rain didn’t stop students from getting splashed with color at Ramapo’s first 5K Run with Color on Sunday.

“We had a little bit of rain in the beginning, but it cleared up,” said Garrett McConville, Student Government Association member and organizer of the 5K. “Overall we had a good day.”

The 5K was held on campus and hosted by SGA. The run raised around $2,865 for the American Cancer Society and the Children’s Specialized Hospital.

“Last year SGA had kind of worked on a paint party, but that didn’t really work out,” McConville said. “We thought that if we could make it a 5K and find a way to turn it into a fundraiser, we could have a fun event on campus that everyone would enjoy and send some money to good charities.”

The 5K Run with Color attracted 182 participants. Melissa Sourbis, a senior, thought the idea was a great way to get students involved on campus.

“I’ve been wanting to participate in a 5K as a personal goal. The opportunity came and I thought it was a fun way to reach my goal while getting involved with the school as well,” said Sourbis. “A number of students participated and seemed to really enjoy it.”

The runners were not just Ramapo students, but also included friends and family of students from nearby areas.

Ashley Garcia, a friend of a Ramapo student, said that the color and unique aspects of this particular 5K attracted her to the event.

“It was awesome! I wish they had more [color] stations, but it was fun,” said Garcia. “I’m going to press my shirt to make sure I get the color stuck on there.”

The run began at the Arch, looped around to the Village, followed Loop Road down to the CPAs and ended back at the Arch.

Many of the participants chose to run in groups. Vice President Cathleen Davey’s daughter, Kelly Corbett, 15, ran with a group of seven girls. The girls agreed that the color was also what attracted them to the 5K.

“We kind of rolled in it,” Corbett added.

After the big race, the marathon runners snapped pictures of their colorful shirts and faces, and munched on Bourbon BBQ catering.

All proceeds from the 5K Color Run will be divided evenly and donated directly to the American Cancer Society and Children’s Specialized Hospitals.