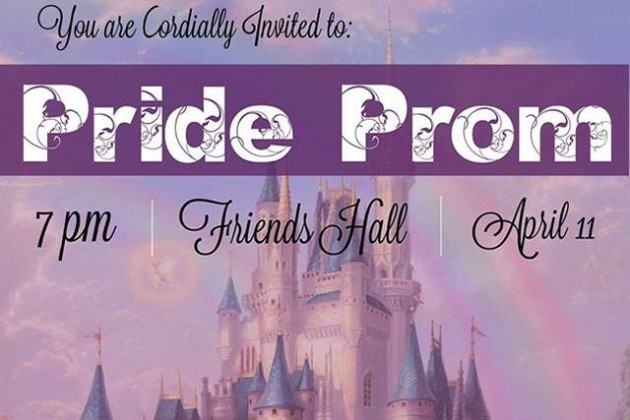 Prom isn’t too much of a distant memory to most college students, but why not relive it anyway? Ramapo’s Pride Prom hosted many students on Friday evening in Friends Hall to celebrate fairy tales, magic and equality.

This year’s Pride Prom theme was “Fairy Tales.” Pride is very democratic in their methods of choosing the theme. Matthew Bernstein, senior and publicist/secretary of Pride said, “We had a Monster Ball theme, a Zombie Prom theme, and then what we do at the meeting is with the list of about 12 themes, people close their eyes and put their hands up for what they want. I think Fairy Tale prom beat Monster Ball by like two votes, and that’s why [the Prom] was fairy tale themed.”

Pride Prom is Pride’s biggest event, and the Pride e-board and its members were heavily involved in all aspects of the planning.

Eden Nguyentan, senior and President of Pride, said, “Every meeting for the past month has been Pride Prom planning. [Pride members] break into committees and that’s another way we like to get our members involved. We have everybody involved in the planning and delegating tasks and responsibilities, and making sure everybody has a say in decorations, prizes and activities.”

There was a nice spread of pasta, garlic knots and chicken fingers by Sonny and Tony’s Pizzeria and Restaurant along with rather large colorful chocolate and vanilla cupcakes from Cupcakes by Carousel. The dance started to liven up towards the middle of the event. Everyone jammed and danced to the remixing skills of DJ Phoenix, a favorite in the Ramapo community.

Along with the DJ, there was also a photobooth where friends could capture memories. The photobooth was from “Any Excuse for a Party.”

Raffles varied this year, with many large prizes that left three lucky Pride Prom attendees smiling. This year, Pride raffled off a $50 Visa gift card, two tickets to the Sex Museum in New York City, and a 16 GB iPad mini.

The smaller raffle prizes consisted of many cute rainbow accessories, like glasses and belts, and even included a unicorn puzzle, rainbow cups, notebooks and magnets.

Pride has always had many supportive co-sponsors. This year, The Women’s Center, the College Programming Board, SAFE (donated the iPad and Museum tickets), the Health Awareness Team, GEAR, and the College Democrats were very gracious co-sponsors for this magical event.

Pride Prom was a huge success this year. The e-board is very dedicated to making every year better than the last.

Nguyentan said, “I would always say it’s a goal to improve upon last year and learn from your mistakes and do better. Last year was a really great success. We co-sponsored with a lot of groups and changed the name of [the event] to the Diversity Dance and tried to broaden our audience. I think it was good this year. We went back to our traditional name, ‘Pride Prom,’ and maintained the same success. We had similar numbers but we definitely had more activities and more prizes.”

Pride Prom achieved their goals this year, hosting 75 students and having an enchanting evening. This event was definitely a night to remember. It wasn’t just about the love between a princess and her Prince Charming, but celebrating the fact that a Prince can love a Prince and a Princess can love a Princess, too.