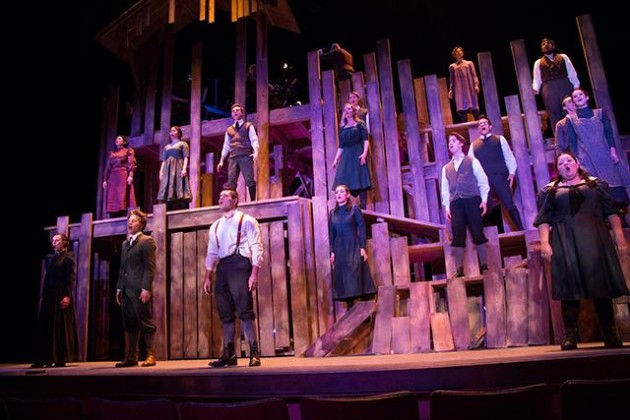 This past Friday marked the opening night of Ramapo’s main stage production “Spring Awakening,” held in the Sharp Theater at 8 p.m. The heartfelt performance brought its audience back to 19th century Germany and into the hearts of teens teetering on adulthood-grappling with the concepts of sexuality, morality and even revolt for the very first time.

“I think as an actor, ‘Spring Awakening’ has been a great experience-it’s a musical, but it’s not your typical musical. It’s about real issues that still stand,” Ryan McGilloway, junior, said.

Winning eight Tony awards, including Best Musical and Best Original Score while on Broadway in 2007, the book and lyrics for “Spring Awakening” were adapted by Steven Sater, playwright, from the controversial 1906 German play by Frank Wedekind. Turning the play into a rock musical, singer-songwriter Duncan Sheik composed a score highlighting the teenager’s inner-and oftentimes blunt-feelings while growing up.

“‘Spring Awakening’ was interesting and different from any musical I’ve seen previously-I really enjoyed the contemporary style of music even though the show took place in the 19th century,” Monica Lucianna, freshman, said.

The show begins with the introduction of Wendla, (Leah Voysey) who, as the audience soon discovers, has never been told the truth behind having a child. She pleads with her mother, knowing there’s more to it than a mythical stork, but is never given a straight answer. She and her friends Martha (Kelly Baron), Anna (Rachel Valovcin), Thea (Christina Gallego) and Ilse (Lexi Lapp) find themselves quickly launched into a world of questions waiting to be answered.

“Not only is the show so raw, but every single cast and crew member has given their all to make the show a success…. This show is one of a kind, and I’m so lucky to be a part of it,” Gallego said.

Then enters the brilliant Melchior (Brendan Guzman), a star pupil, who is wise beyond his years, and his not-so-brilliant friend Moritz (Brian Petty) who finds himself struggling to keep up with school and his own emotions. He’s not the only one fighting to make sense of the world-their classmates Hanschen (Tom Kiely), Ernst (Ryan McGilloway), Georg (Warren Dolan) and Otto (Chris Gordon) also find themselves questioning the roots of their desires.

“Working on this show has been absolutely incredible. Every rehearsal was not only a chance to work on a beautiful production, but also a chance to learn and grow from professionals,” Dolan said. “Working alongside such a talented cast and creative team is an amazing experience.

As a whole, “Spring Awakening” is a snapshot of the apprehensive feelings teenagers are wrestling with as they face adulthood. The show may have taken place in 19th century Germany, but the characters’ thoughts and feelings are not so distant from its 21st century college audiences; bringing to light the very real and very relatable issues students face even today.

“This play is about young people who are all experiencing the awakening of desire, the same rebellious instincts, the same strain between being a child and being an adult, together but utterly alone,” Cat Miller, director, stated in her Director’s Notes.

Performances of “Spring Awakening” will continue with three more performances on Thursday, April 17, Friday April 18, and conclude on Saturday April 19 in the Sharp Theater.

“The entire company has worked tirelessly on this production and it really shows,” Dolan said.