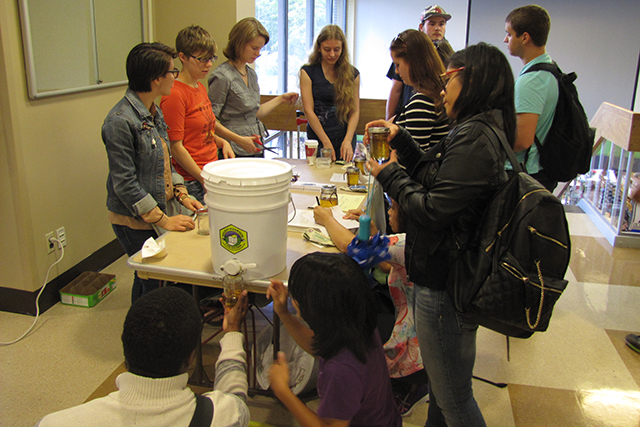 The Ramapo College Beekeeping Club, or RCBC, sold jars of raw honey, harvested here, on our campus, in the Student Center last Tuesday and Wednesday.

According to the RCBC president, Kristen Andrada, the sale promoted awareness for their club, brought attention to bees and to the importance of locally harvested honey.

Because the honey is harvested on campus, it contains pollen from our area and consuming the honey can help with seasonal allergies. Whereas, if a student purchases honey that is not harvested locally, the honey will not have the same effect.

“It’s not commercially processed; it’s local,” Andrada said.  “It can help students who have different allergies to certain plants on campus.”

According to RCBC secretary, Melissa Mayberry, honey from larger farms does not have the same quality as locally produced honey.

“The really big honey farms don’t have the best condition for bees, since they only have one crop that they expose them to,” Mayberry said. “They’re getting all their pollen from the same place, so there’s not a lot of variety.”

Senior Radwa Abdallah appreciated the honey she bought at the sale.

By selling honey, RCBC also wanted to show that bees are not just honey producers and stinging insects. In fact, according to the Natural Resources Defense Council, bees contribute to the pollination that provides 30 percent of our world’s crops.

“When a lot of people think of bees, they think they’re going to get stung … They can be gentle creatures, and you can work with them. They’re not necessarily going to sting you unless you aggravate them,” said senior Katey Sleight, a member of RCBC.

According to Mayberry, bees can be friendly creatures.

“I actually like getting close to the bees. I know not everyone likes that, but I think it’s really fun," said Mayberry. "The bees aren’t mean or anything. It’s pretty cool when you put nectar on your finger, and they lick it. They won’t sting you as long as you’re not being threatening."

RCBC plans on hosting more campuswide events, such as extracting honey and making lip balm out of beeswax, where they can demonstrate how important bees are to our daily lives.

"I enjoy sharing the bees with everyone, so they can appreciate bees a little more,” said Andrada.