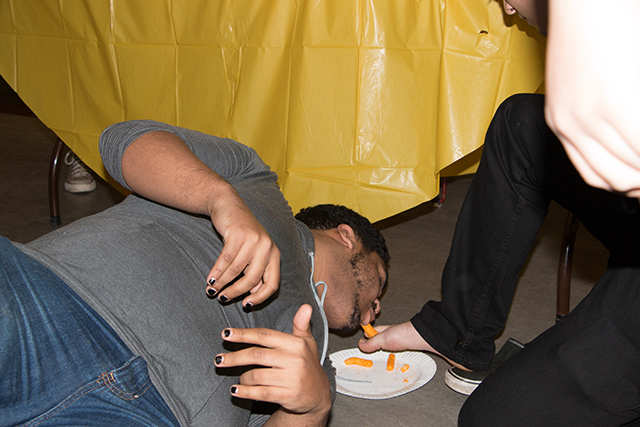 The College Programming Board hosted the second annual Fear Factor event in Friends Hall this past Saturday. The six teams, all made up of Ramapo students, competed to be crowned Fear Factor champions.

The opening challenge had one team member feed their compatriot Cheetos by way of bare foot. The team that had the most Cheetos downed within the allotted time would be named the winner. Each task awarded the challengers points based on completion time; the first place team would be given six points, the second team five and so on.

Tables were set up in front of the stage for the participants, while attendants sat at round tables set a little further back.

The turnout for this event was overwhelmingly positive; Friends Hall had a buzz about it at the start of the event, but dwindled as the night grew long.

What hindered the event was the lack of organization, and the extensive gaps between contests. This eventually led to students filing out and the interest of those who stayed waning.

The second challenge involved licking lifesaver candies and sticking them onto a teammate’s face, the first team to have 10 mounted to the face of their partner would be victorious. The host who explained each challenge forwent the use of a microphone, which made it incredibly difficult to hear even though he projected.

The majority of the events were food related and required the contestants to eat gross concoctions whipped up by CPB. One such combination was a wrap made up of jalapenos, peppers, wasabi and sardines. Another food challenge asked contestants to slurp sweet potato, chicken and carrot baby food through a straw.

Towards the finale, students were encouraged to come up and watch to get a better view, but even that was in vein because trying to see the action, which took place below the audience, was troublesome. A new champion was crowned and was composed of representatives from CPB, dethroning the previous winners of the event. The victors were the best in show after seven unsettling events, a few teams threw in the towel, and their lunch, before the contest was finished.

It was amusing to watch fellow students go through stomach turning activities, but the structure of the event inevitably failed everyone who wasn’t a part of the show.