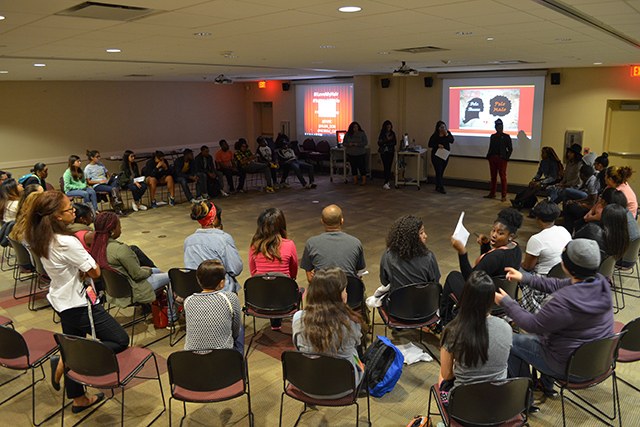 The Latino Heritage Month Committee hosted a Pelo Bueno, Pelo Malo Roundtable on Tuesday to educate and discuss the many different types and textures of hair, and the everyday insecurities that women and men deal with in regards to their hair.

Members of the Association of Latinos Moving Ahead (ALMA), Chi Upsilon Sigma National Latin Sorority Inc. and Ebony Women for Social Change took turns speaking to the crowd and sharing their thoughts. Natalie Quinones, president of ALMA, opened the event with an icebreaker, encouraging those who attended to feel more comfortable during the discussions.

These discussions were based off a PowerPoint that illustrated some of the different hair textures that are the most common in society. From kinky to indigenous, the different types of hair were met with “oohs” and “aahs” when audience members’ hair types were shown. Many of those who identified with curly or kinky hair were surprised because they did not know that within their hair type there are subcategories.

Throughout the event, the Association of Latinos Moving Ahead, Chi Upsilon Sigma National Latin Sorority Inc. and Ebony Women for Social Change went around the room with a whiteboard asking students why they loved their hair, using the hashtag #iLOVEmyhair, and in Spanish, #yoAMOmipelo.

Responses included: “It makes me feel beautiful,” “I can do so many things with it!” “I have waves,” “I can wake up and go” and “It makes me who I am.”

Society projects a certain image of what beautiful hair is, leaving those with hair of different textures insecure about their locks. Pelo Bueno, Pelo Malo encouraged students of all hair types to embrace their natural hair.

Sheila Soriano, scholastic chair of Chi Upsilon Sigma National Latin Sorority Inc., spoke of her experience with Marley Twists, two strand twists with extension hair known as Marley Braid Hair, which has a more natural hair texture. She attended the event not only because her organization was sponsoring, but also because she wanted to share her experience.

“I wanted to try Marley twists on my hair and everyone kept telling me not to,” Soriano said. “Once I had them in, those people were now asking me if they can touch my hair and told me that they loved the way it looks on me. I only had them for a short period of time but I really liked being able to have that experience.”

Ebony Women for Social Change had previously held events in past years where they spoke of the type of hair that many different cultures had. The events hoped to give recognition to the importance of being educated on all hair textures, which is why they decided to help sponsor the event. Ranasia Sangster and Brittany Peters, both members of the club, held a discussion where they shared products that they used to maintain healthy hair.

Many students who attended expressed that their curiosity is what brought them to the event. Two students mentioned that they wanted to know why some women wore scarfs around their head. Another said she did not know what to do with her hair anymore because she had no idea what hair products to use; this event helped in understanding how to handle the texture of her hair.

Some men in the crowd also shared what they used on their hair and how they styled it.

The event promoted the understanding that, no matter one’s hair type, people should be proud of the hair they were born with because it makes them who they are.

“There is no good or bad hair,” said Hychia Troutt, the president of Ebony Women for Social Change. “There is only healthy and unhealthy hair. It doesn’t derive from your textures, rather how you take care of it.”