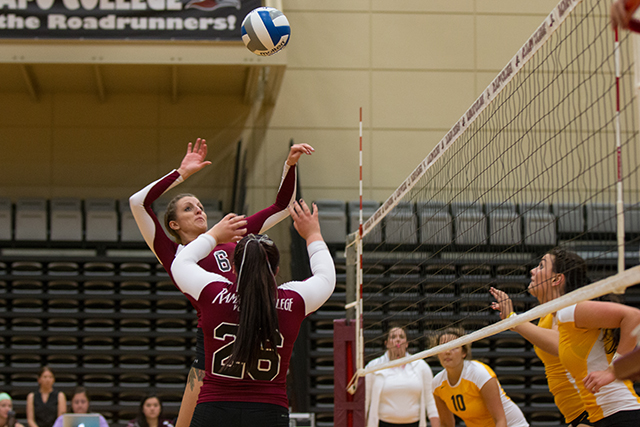 The women’s volleyball team looked to rebound from a disappointing 3-0 loss to Kean University last week when they took on the Rowan University Profs in a New Jersey Athletic Conference match on Tuesday.

“One thing is that we are missing our number one player,” said Ramapo’s tenth year head coach Robert Pichardo. “She’s hurt; she’s supposed to be coming back soon and that’s the missing link that we need help with.”

For the Roadrunners, sophomore middle blocker Emily Guzman had a team high three blocks to go along with an ace, nine kills and six digs. Junior captain Emily Harris led the defensive charge with 26 digs in the match. She also posted four assists. Junior setter Kaitlin Mac Iver had a team leading 28 assists and recorded a kill, three aces and 11 digs in the match.

For the Profs, junior Kelsey Mazurek recorded ten kills, one assist and a dig. She was one of three Profs to reach double digits in kills. Junior Morgan Mende led her team with 17 kills while registering an assist and three digs of her own.

Junior Danielle Havlicek posted a team high three blocks while tallying an ace and 11 kills for Rowan. Freshman Mary-Grace Testa had a team leading 26 assists as she added a block and six kills. Sophomore Jennifer Vorel led the way in digs with 27 while recording two assists.

Postgame, junior middle blocker/opposite hitter Katelyn Ward did not think the match against Rowan was a horrible loss.

“I think we were able to see what Rowan had, we can take that into postseason,” said Ward. “They were a very good team all the way around offensively and defensively. We could see what we have to work with what we have to keep in mind. I didn’t think it was a terrible loss but it’s something we’re definitely going to take away from for sure.”

After falling to 17-8 on the season and 3-2 in NJAC conference play, the Roadrunners plan to prepare for Rutgers-Newark and Rutgers-Camden the same way as they would for any other team.

“Same way that we have been preparing, no different,” said Pichardo. “We have to have a clear mind of what we want to do and be able to see it through.”

The Roadrunners will travel to Newark to take on the Rutgers-Newark Scarlet Raiders in an NJAC Conference matchup on Oct. 16 as they look to get back into the win column after two straight losses.

“I think we’ve done a lot of good work in practice especially on fighting for points and really earning points,” Ward said. “Volleyball is a game of mistakes and it’s going to happen. But otherwise I think we’re an all around good team, we just have to work a little bit more on the mental game.”