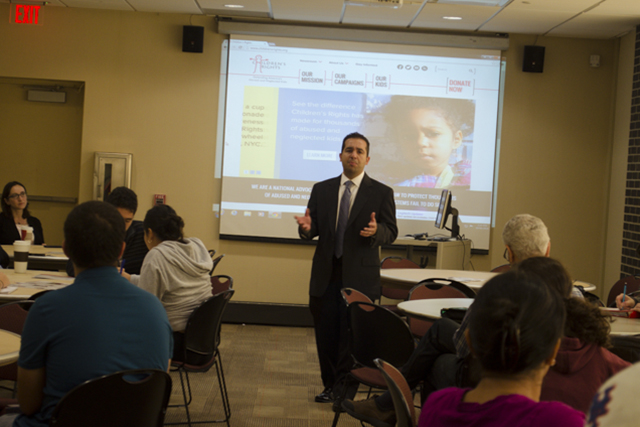 Interim Executive Director of Children’s Rights Sandy Santana was the moderator at this month’s installment of the Law and Society Faculty Convening Group’s Supreme Court of the United States (SCOTUS) discussion series.

Children’s Rights is a national non-profit watchdog group that advocates for the rights of minors in the government’s care. Santana educated students and faculty on the faults of the U.S. foster system and how he and his agency use the courts to advocate for their rights.

The SCOTUS series evolved from the Law and Society Faculty Convening Group Café Demo sessions, and for the past year have been a thoughtful series of discussion between students and guest speakers. Speakers examine aspects of the U.S. court system and discuss landmark decisions that affect every day American lives.

“With the SCOTUS series we want to have discussions on topics that might interest students, but also that they should know about,” said Professor Mihaela Serban, convener of the Law and Faculty Group. “And these events have been extremely successful, in the past we have discussed topics such as gay marriage, affirmative action and public offenders.”

Each SCOTUS event is focused on an issue affecting our country and its implications on politics and the democracy of court decisions.

“The whole point of SCOTUS is to ask ‘how does the law and court system affect us?’” said Brandon Martin, coordinator for civic engagement and student leadership programs, Ramapo graduate and one of main coordinators for this event. “Every month we want to ask how the Supreme Court impacts our community.”

Professor Serban believed Children's Right was the perfect choice for the series.

“Children’s Rights essentially uses the law to protect the rights of children,” she praised. “They are the only public institution dedicated to changing welfare rights on a state and federal level.”

Santana gave a particularly moving and provoking presentation on the issues surrounding the plight of the 400,000 foster children in this nation.

Often when children are abused and neglected at home, it becomes the states responsibility to intervene; however, Santana argues that the government is failing the majority of these children.

“We have such little exposure to the foster system,” Santana said. “It is an invisible population we do not have much contact with and because of this most vulnerable.”

Santana asserts that because these children have no one to give them voices they are easy targets. She added that states often take resources away from foster systems during budget cuts, creating a system with a lack of resources and man power to address the needs of thousands of children.

“Kids languish in overcrowded group homes. Overworked social workers don’t have enough time for each child,” Santana said. “The objective of the foster system should be to reunite children with their families, and if that fails to place them in a safe and permanent family. These kids need more services from the government, not less. Children are continually neglected and re-victimized by the government, who should shoulder the responsibly of caring and nurturing children they take out of their homes," Santana added.

Children’s Rights finds plaintiffs in different states and makes a class action lawsuit that represents thousands of children in those states. One of their 14 lawyers is then dispatched to a state to argue the case.

These lawsuits take a long time, as with each appeal the case goes to a high court until the Supreme Court passes judgment on the case and makes it the law. Past cases won by Children’s Rights include limiting the amount of children a caseworker is responsible for, raising adoption rates and improving infant care.

“These lawsuits are tools,” said Santana. “If we get a court order, services cannot be cut just because of political or administration change.”

Many in attendance of this SCOTUS event were inspired by Santana and the work of Children’s Rights, such as junior social work major Wilma Hernandez.

“I found him to be very informative and really felt for the work he was doing,” said Hernandez. “Because this is what I want to do, my heart really went out.”

Next month concludes this semester’s SCOTUS discussion series. The final discussion will be concerned with Hunger in America.