“Bottle House,” the first student production of the year, came as a multiwork adaptation based upon the works of legendary playwright, director and actor Sam Shepard. Shepard allowed creators Maria Vail and Sheila Tousey access to his body of work, resulting in a hodgepodge of 45 different sources blending to create one original production performed for the first time at Ramapo.

The play begins in a funeral parlor where a dysfunctional family attempts to select an urn for Marie (Cassandra Shiller), a troubled woman whose life abruptly ends following years of abuse and instability. The catalyst for the story is Marie’s eldest daughter Rose (Christina Gallego) who is determined to drive her mother’s ashes across the country.

Throughout the journey, the play flashes back to vignettes of Marie’s life that eventually lead up to her death. Her budding romance with rugged but seemingly sensitive Price (Jack Waller) is sweet and pure but the love is impermanent. Price is violent and unpredictable; he threatens near-stranger Montana (Liz Gonzalez) with a rifle and in one telling moment points his pistol at young son Jack (Nick Walsh) who unknowingly draws circles in the sand.

Price’s actions are often mysterious, causing strife in the relationship; he becomes obsessed with finding illusive treasure. One of the most powerful moments is the inevitable collapse of an already dilapidated family. The arguing leading up to the entry of the house prompts the children to hide all of the weapons, however, Marie attacks Price and threatens to kill him. She escapes but never returns; he makes psychotic pursuit but eventually abandons his family. The children are left in the hands of Price’s father Floyd (Alex Luckenbaugh) who’s calming presence and gentle nature is an unexpected force in the play.

Rose, with the ashes in tow, comes upon an injured hawk (Jim Phillips) that she believes to speak. The hawk is more or less an abstraction in the play but provides some poignant insight to the mindset of Rose.

The set utilized the space brilliantly and captured the rustic Midwestern setting with the use of period appropriate props and singeing orange lights that captured the beating sun. It was well-staged and quite lovely.

Before Marie’s death, Rose tracks her down and finds her performing as a lowly lounge singer, now a seemingly detached version of herself. Marie treats Rose as an old college friend as opposed to a close family member and it is soon revealed that Price passed away in a babbling drunken stupor with Jack at his bedside, with little regard for his abusive father.

The tragic telling of a broken family is distressing, moving and entirely original. The action transcends written material and paints an unnervingly common societal theme of maltreatment, familial trauma and substance abuse. A bottle house is often characterized by its array of colors that refract a dazzling display of unique edges, hues and shapes; a representation for the intertwined relationships of the many characters whose lives are directly affected to an endless extent by that of their predecessors. 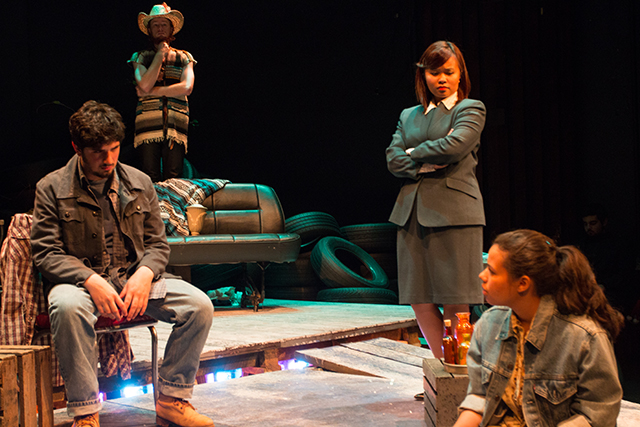