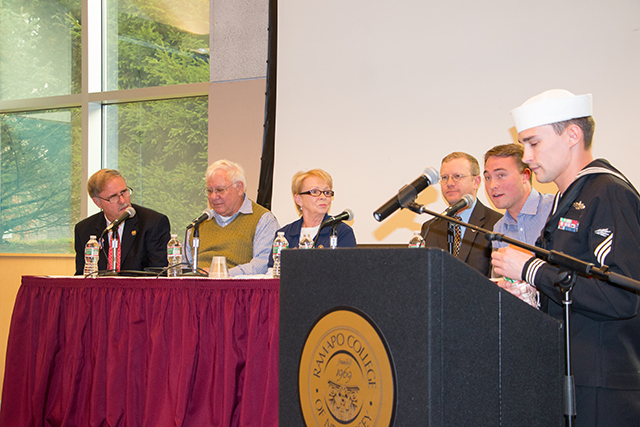 Benefits for returning soldiers, a disconnect between new and old veterans and the role higher education can play in helping those who fought for our country was discussed on Veteran’s Day, during a talk held in the Pavilion.

The discussion, cosponsored by the Student Government Association, the College Republicans and the College Democrats in the Pavilion, was moderated by the president of the Veterans Student Organization, Ernie Szucs III. Panelists included Gary L. Montroy, Jeremy Teigen, professor of political science, and Assemblyman Robert Auth, among others.

“It is important to pay tribute to our veterans, not just today, but every day,” Szucs said in his opening speech.

President Mercer also gave an opening speech, throwing out a few jokes before moving on to discuss the College’s commitment to veterans.

“Our commitment to our veterans is strong and derives from the very first months and years of Ramapo, when many vets came through the doors for an education,” Mercer said, before asking Gary Montroy, a member of the Ramapo Board of Trustees and veteran, to lead the panelists and the audience in the Pledge of Allegiance.

When introducing himself and his background in the military, Assemblyman Robert Auth spoke of legislation he worked on to aid veterans.

“I have several bills that I have sponsored that would help…military people on behalf of the legislator with regard to education and several other inequities — I would say — that we’ve noticed and wish to address and correct,” Auth said. “I make it my business to make sure that our veterans … get the best opportunity possible to advance their careers through the state education system, and I am delighted — actually delighted — that President Mercer has said to us that the school is veteran friendly and from what I’ve seen here today, it’s certainly true.”

Terry Wendrychowicz was also a panel speaker at the discussion. Wendrychowicz is the founder of Mahwah Marine Moms, a group that hosts events and fundraisers to support the troops and veterans. Since the group was founded in 2006, they have sent thousands of letter and cards to troops, along with personal items, clothing and even Girl Scout cookies.

When discussing the College’s treatment of veterans, Wendrychowicz said, “I think that Ramapo College is on the right step in what they’re doing and the way they’re treating our veterans, and I thank you for that.”

However, when the panel was asked if they felt the services provided for returning veterans was adequate, Montroy responded, “They’re not sufficient. We need more of them, and we need better administrators at the VA so that veterans don’t get lost in the shuffle. The Veteran Administration is like any other bureaucracy, unfortunately they’ve lost their mission. Their mission should be serving veterans, not themselves.”

During the student question and answer portion of the panel, the question of how to get involved with helping veterans was asked.

“Work with your local veterans club … There’s always room, and the need is there,” Montroy stated.

When asked if there was a disconnect between the current generation and veterans Teigen explained, “We don’t need giant land-armies to defeat enemies in epic land battles overseas. We rely on a very, very small, highly professionalized force, and we don’t make as many veterans as we used to. So, you’re not gonna meet as many, just proportionately as previous generations. It might make it a little harder for people who want to connect with the veteran community, but I hope that doesn’t stop you.”